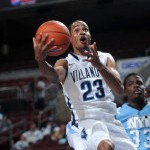 Junior guard Dominic Cheek was named to the Big East Honor Roll by the conference office on Monday afternoon. He averaged 22 points and 6 rebounds over the first three games of the season for the Wildcats; all victories. He had a career-high 27 points in the opener and added another 21 on Friday night.

The Big East Honor Roll is a weekly award given to recognize athletes for their notable performances during the prior week.

The Philadelphia Big 5 also puts out a weekly Honor Roll, which included Villanova point guard, Maalik Wayns this week. The honor was primarily the result of Wayns' role in driving a comeback, overtime victory for the Wildcats over Big 5 rivals La Salle last Tuesday. He also scored 21 points and had 5 assists in a win over the Delaware Fightin' Blue Hens on Friday.

Villanova's women's cross country star, Sheila Reid, won her second consecutive NCAA National Championship on Monday afternoon in Terre Haute, Indiana. She sprinted to the finish line of the race to take first place, ahead of Oregon's Jordan Hasay, who has often found herself looking at Reid's back at the end of races.

Reid, a Canadian, earned All America honors for the effort along with Serbian teammate Bogdana Mimic, who finished 6th. The team finished in third place, however, after winning the team championship in 2009 and 2010.

"It is very satisfying to win my last collegiate cross country race," Reid said. "I still have an outdoor season but coming in here as the defending champion I really wanted to finish cross country on a strong note and win the individual title again. It may sound trite but I love to win and after college the opportunities to race in cross country are limited."

Georgetown took home the national title while Washington came in second. The race was close, with the top three teams separated by just 19 points.

Senior corner James Pitts and junior center Dan Shirey were among the league's first team selections. Pitts had previously made the third team in both of the previous two seasons. He finished this season with 60 tackles, five interceptions (second in the CAA), five pass break-ups and a fumble recovery. Shirey was also a third team selection last season and anchored an offensive line that was lacking in Division 1 experience.

Junior punter Mark Hamilton and freshman linebacker Dillon Lucas were third team selections for the Wildcats. Lucas lead the Wildcats with 92 tackles (51 solo) and had 3 tackles for loss and 2 sacks while starting all 11 games as a true freshman.Hamilton was in his first season punting for the Wildcats, taking over for Dominic Scarnecchia, who graduated. He averaged 42.8 yards per punt, and placed 17 insider the opposing 20 yard line. 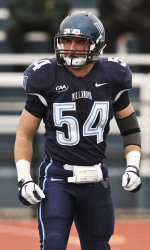 He is also a finalist for the inaugural Jerry Rice Award, to be given to the most outstanding freshman in FCS Football. That award's winner will be selected by a "national panel of communications and media relations directors, broadcasters, writers and other dignitaries" at some point after the regular season and will be presented at an awards banquet on January 6th, in Frisco, Texas.

"Dillon is very deserving of this award," said Wildcat head coach Andy Talley. "We placed a great deal of responsibility on Dillon this year and he responded each and every week. I expect Dillon to continue to improve and become one of the premier defensive players in FCS football."