Boise State needs to line up a western partner in order to finalize a move to the Big East conference and the initial target to replace them was Brigham Young University. The Mormon flagship university is big television draw as it is the global Mormon university that is as strongly identifiable with that religion as Notre Dame is with American Catholicism (if not more). Both sides were interested in the possibility, but ultimately the deal appears unlikely to be done. 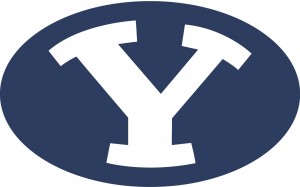 Rumors started to leak to the media on Monday that the BYU television deal in football would be a sticking point for negotiations, and that discussions over how the Cougars' would handle their television contract were delaying the process of finalizing a move. By Tuesday, reports were noting that the Big East and BYU had ended their discussions and that the conference would move on to other candidates.

BYU was apparently insisting on retaining the television rights to their home football games or to be given an "'ironclad assurance' that its situation regarding television exposure would be improved as a Big East member." No school in any FBS conference currently retains the rights to it's own home football games. Allowing BYU to do so would essentially wipe out the major value of adding them to the conference, as the league would not be able to offer those games as part of it's package to the television networks.

"They (BYU) are being extremely unreasonable all of a sudden," a source told CBSSports.com's Brett McMurphy. "This is one reason why they did not get into the Big 12. Their general counsel (lawyers) is a piece of work."

While sources have told the CBS and the Associated Press that the move was dead, the Salt Lake Tribune's sources suggest that BYU could still change their mind. According to the paper, the Big East made what was their 'final offer' recently and while BYU officials rejected that offer, they could still reconsider in the short-term, but any further action will have to come from Provo.

The Big East is still hoping to wrap up expansion talks sooner rather than later, but snags with the BYU television deal as well as (potentially) some difficulty with negotiating a way out of Navy's television contract are slowing the process. Air Force has also delayed a final decision and will not give the Big East a yes-or-no answer until after their football season ends on Saturday.

Houston, SMU and UCF are expected to be announced as new members and if either Air Force or another western school accepts an invitation, Boise State is also believed to be planning to sign on with the Big East. All of those schools would be in a western division.

While Air Force continues to weigh it's decision, CBS is reporting that San Diego State University has become the primary target to join Boise State in the west. SDSU is currently a member of the Mountain West Conference, but has been campaigning to move to another conference very loudly in recent days — sending letters of interest to the Pac-12, Big 12 and Big East offices. It seems that they would be an acceptable solution for Boise State. 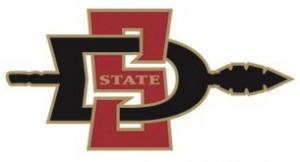 The SDSU athletic director, Jim Sterk told the San Diego Union-Tribune that there was nothing to report regarding the Big East on Tuesday, but that they had some preliminary discussions with the Big East a few weeks ago. It may be possible to lure them to come on-board and travel will not be very difficult if a true 6-member "west" division is formed.

One possible sticking point for SDSU is that they would need to find a new home for their other sports, including a basketball program that has been on the rise lately, producing stars like Kawhi Leonard. The Big West seems like a likely landing spot for those teams, but that would be a big competitive step back for the university. They could also petition for a spot in the West Coast Conference, but would seem an awkward fit as a secular state school.

Nonetheless, the Big East is working hard to convince them that the television money and exposure in football will be much greater in the Big East than their current situation. It would be a risky proposition to turn away from a potential long-term financial benefit to benefit a sport that isn't likely to generate them nearly the same revenue.

The Big East currently pays more than double what the Mountain West does to its members, and that disparity could potentially increase once new Big East television contracts are negotiated soon. Some people believe the increase could be very significant.

The BCS system plays into that estimation, however. The Big East was blessed by the initial BCS contracts with elite status among football conferences. That status demands television exposure, which means larger payouts than the conferences who were not so blessed.

While it would seem unlikely that the Big East's automatic bid would be dropped with the expected new additions coming on-board, there have been discussions about changing the BCS system altogether. Possibilities include taking just the top-10 teams for the 10 bowl spots regardless of affiliation, or eliminating the four BCS bowls from the system and having just the National Championship game decided by the system.

In either scenario, the Big East champion would not get a bid to one of the major bowls simply by winning the conference. The champion would likely need to place highly in the BCS standings. If the four non-title bowl games are dropped from the system, they would likely fall back to their conference affiliations — a factor that hurts the Big East, which has not had a specific BCS bowl tie-in since their association with the Orange Bowl ended in 2005.

Does any of this affect Villanova?

For the basketball schools, the identities of the new western members of the football conference are lately unimportant. What is important, however, is that the football side of the conference remains in place and relevant enough to help the basketball television negotiations. Preferably, as a BCS AQ conference, but if the AQ system changes dramatically, that wouldn't be an issue.

The all-sport members don't likely change in any scenario involving football only schools out west. It will be Houston, SMU and UCF who are invited to the Big East basketball tournament in New York City every year.

BYU isn't in the BCS standings right now. They also haven't been to a BCS bowl game since that system started. Their value is in their brand and television drawing power. The Big East football members would likely be richer with BYU than another option, but will be richer with Boise State's BCS credibility than without, and the richer the Big East football schools are, the more stable the conference will be.

For Villanova's football aspirations, a struggle to find team number-12 could accelerate the 'Cats candidacy into the present. If not, the 'Cats are likely better-off with a school like SDSU joining the conference now, as that might increase the chance of further expansion. That move would mean that a desirable western option in BYU is still out there to join as a 14th member if Villanova finally does get its chance to move.

If BYU is off the board, the Wildcats would need Memphis or another school to become a Big East target to be invited to join (and would have to present themselves as a better option than any other school as well).

Based on the current rumors and discussions, the new-look Big East conference is expected to look like this: