Share All sharing options for: (Santa) Clarifying the third-place game 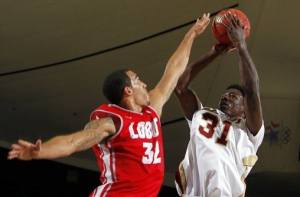 Saint Louis was always going to be a tough match-up for Villanova, but the 'Cats will match-up much better with WCC minnow, Santa Clara on Sunday. The 76 Classic is essentially a bust for the Wildcats, facing one tough opponent in a loss that exposed a few well-hidden chinks in their armor. Instead of closing out the tournament against Oklahoma with a chance to win some hardware, the 'Cats will play for third place.

The Broncos' key win so far was against New Mexico in the opening round of the tournament, needing overtime to get past the Lobos. They were a pretty big underdog in the tournament field (though not nearly as big a dog as UC Riverside), but managed to down a talented but inconsistent team before losing in the second round to Oklahoma.

Offense isn't a big issue for the Broncos, who have three players averaging double-digit points. Junior guard Kevin Foster leads the way with 17.5 points, 3.5 rebounds and 3.3 assists per game. Evan Roquemore, a sophomore guard averages 15.5 points, 3.8 rebounds and 4.8 assists per game (as well as 4 turnovers), to form the other half of a very effective backcourt tandem.

Roquemore connected on 7 shots from beyond the arc in the Broncos' loss to Oklahoma enroute to a 27-point scoring performance. Foster lead the nation last season with 140-made three-point attempts. About 45.9% of their shots are taken from beyond the arc.

Joining those guards in the scoring column is junior forward Niyi Harrison with 14 points and 6.5 rebounds per game. Getting Harrison involved offensively seems to be a key for the Broncos to win. He had 19 points in their win over New Mexico but just 6 against Oklahoma.

While the Broncos offense has the potential to score a lot of points if those three players reach peak productivity, their defense does not rate among the nations' best. They sport the 241st defense by efficiency, according to KenPom.com. They put their opponents on the free throw line at a high rate and allow a high percentage of three-point shots by opponents, and are below-average at generating turnovers.

They have out-rebounded opponents slightly this season, but much of that can be attributed to a 50-to-29 rebounding margin over San Jose State. In the past two games in Anaheim, the Broncos have been beaten on the glass, 75-to-51.

The Wildcats will be capable of beating the Broncos on the glass, and will have to take advantage of their tendency to give fouls on defense to get to the line for easy scores.

The concern in this match-up is their three-point shooting. Villanova will need to step up and play strong perimeter defense, particularly on the Broncos' backcourt. The two starting guards for Santa Clara are 6-2 and 6-3, meaning that Villanova will not be at a large size disadvantage in any defensive match-up.

SLU's three-point shooting was ultimately how they generated the offensive firepower to get ahead of Nova and hold a lead. Santa Clara seems likely to try to exploit the Villanova defense in the same way, which means that the Wildcats will have to find a way to close that gap, or pray that the Bronco shooters go cold.

The game will tip off at 6:30pm on Sunday, November 27, in Anaheim, California. Television coverage will be available nationally on ESPNU.