Share All sharing options for: Sloppy Cats' Bucked By Broncos 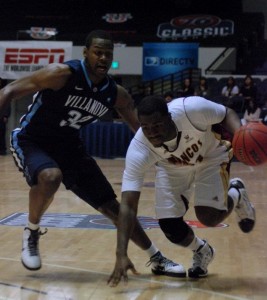 Villanova struggled to defend on the perimeter again, and lost its second straight to Santa Clara in a 65-64 nail biter. After falling behind by as much as 8 points in the first half, the Wildcats climbed back into the lead, going to halftime up 35-34 over the Santa Clara Broncos. They held that lead for most of the second half, and were ahead by five points with a minute left in the game, but a series of mistakes and miscues allowed Santa Clara to close the gap and hand the 'Cats their second loss, 65-64.

A key moment late in the game saw Santa Clara close within three points with possession of the ball and just 7 seconds left in the game. Darrun Hilliard intentionally fouled Evan Roquemore, but there appeared to be some confusion on the bench. When the referees awarded free-throws, Jay Wright exploded, pulling the referee aside on the issue.

According to assistant coach Doug West, the referees told the Nova bench they had a foul to give prior to that play. The scoreboard apparently also read just 5 team fouls on Villanova. The official scorekeeper had a different count, however, and the Santa Clara shooter went to the line and put the Broncos within 1 point.

"That was crazy, but we did everything we could possibly do wrong after that," head coach Jay Wright told reporters afterward. "So it was much more on us."

After the free-throws, the 'Cats struggled getting the ball inbounds through pressure, eventually getting it in to JayVaughn Pinkston who was immediately fouled. Pinkston missed the first shot of a 1-and-1 and a Santa Clara player grabbed the rebound. Pinkston then fouled Roquemore again, giving the Broncos a chance to win it on the line.

He made both free throws to give the Broncos a one-point lead and left the 'Cats with just 4 seconds to try and win the game. 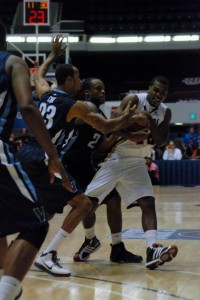 Maalik Wayns tried a half-court prayer as time expired, but was off-target.

The Villanova lead was as big as 9 points with 3 minutes remaining, but a combination of sloppy play and poor shooting allowed the Broncos back into the game. Five of the Wildcats' 14 turnovers came in the last three minutes. They also failed to score again after a Darrun Hilliard three-point jumper with 3:35 left on the clock.

Hilliard was replaced in the starting line-up by JayVaughn Pinkston, who made his first college start for the 'Cats on his 20th birthday. He scored 6 points on 1-of-1 shooting from beyond the arc (1-of-3 overall) and added 4 rebounds, 1 assist, 1 steal and 3 turnovers.

Mouph Yarou scored 19 points to lead the Wildcats in the loss. He added 7 rebounds, 2 assists and 2 blocks as well. Dominic Cheek and Maalik Wayns each added another 10 points and were the only other Wildcats in double-digits.

Wayns lead the team with 3 assists and with 4 turnovers.

The Wildcats shot 37.5% from beyond the arc, lead by James Bell who connected on two-of-5 attempts (40%). Four other players connected on at least one three point attempt. The team shot 41.2% overall from the floor and 72.7% at the charity stripe.

Santa Clara, meanwhile, connected on 44% of their shots from the field, 40.7% from deep and 90.9% from the free-throw line. Forward Raymond Cowels III lead the way with 20 points and connecting on 6 shots from deep. Roquemore scored 15 points, made 8 free throws for the Broncos, and lead their attack with 9 assists.

"Their three guards dominated the game," Wright told the Philadelphia Daily News. "Not only did they score, but defensively, they got in us. We couldn't get by them.

Villanova drops to 4-2 on the season with the loss and will look to bounce back next weekend against Penn at home.