Share All sharing options for: Allan Ray Signs in France 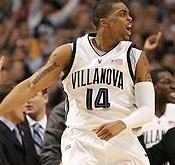 Villanova Alumn Allan Ray has signed with Pau Orthez in France. After a stint with the Boston Celtics, Ray has played in Italy's top flight and in Slovenia and now moves to the top league in France. Ray was among the group of recent Villanova basketball alums who returned to campus during the NBA lockout to work out and stay in shape until the labor dispute was over.

"This team is the closest thing to a[n American] professional organization that I have come across since I've been in Europe. Pure professionalism," Ray said. "[T]hey have great facilities, NBA-like.

"NBA or Europe, I'm just happy to be playing ball."

With foreign teams signing a number of NBA professionals in the wake of games being canceled this fall, the lockout had a ripple effect that carried over to American professionals like Ray, who had been playing abroad.

Ray is moving after a brief stint in the Slovenian league where he participated as a freelance medical replacement player. He played an important role in the Eurocup competition for Krka Novo Mesto. The former Nova star had 14 points, 4 assists and 2 steals in 21 minutes against Lietuvos Rytas on November 15, and followed that up with a 23-point, 4 assist, 2 rebound performance on November 22 against Le Mans. He also played a big role in a few Adriatic League games for the Slovenian side.

The current contract emerged shortly after those performances.

Ray has previously had success in the highest league in the Italian basketball structure, Serie A. In past years he has played for Rome, Ferrara, and most recently Carife Montegranaro in that league. This will be his first experience playing for a French team. His friend and former teammate, Curtis Sumpter, had previously played in France with some success.