Squeaky Sneakers is one of VUHoops' emeritus readers, living the good life with his wife of many years in Sedona, AZ. He visits VUH often, but posts selectively. However, when he does, it's a doozie. Squeaky has seen most of the Villanova greats play over the years an offers a perspective that I treasure as a student of Villanova history. He made one of his rare posts in today's 2011 Inductees into the VUHoops Basketball Hall of Fame article. It was too good to leave buried there, so I decided to reposition it in a place more befitting the insights it offers. I hope you don't mind, Squeaky!

"If just one story can dispel any doubt about Al Severance's worthiness for our HOF, this may do it. World War II had officially ended; veterans trickled back to their homes. Those who couldn’t find work received government support. Every week, for 52 weeks, they’d show up at the VA office to collect $20. "I’m a member of the 52-20 Club," they would respond when asked how they make their living. Membership was Uncle Sam’s way of saying thanks while they adjusted to civilian life.

With time on their hands and money in their pockets, many gambled. I was then 17, too young to have served. But I saw them in the local Brooklyn poolroom where bookmakers were so busy taking bets; they all but ignored the rental fee for my table time. Small change.

I chalked-up my cue stick while making a 360-degree sweep of the room. Blackboards, covered with the day’s college and pro basketball odds, plastered every wall. Betting was illegal, yet I saw uniformed, jovial police walk in and out. When they took no action, I concluded they’re being paid to turn their heads. With the approval of the police, gambling was everywhere.

I had no idea at the time that I’d become a Villanova student in a few years, nor had I heard of Villanova’s basketball coach, Al Severance. But this story is about him. It tells how he kept the post-war basketball gambling cancer from Villanova’s doorstep.

What motivated White to make the transfer? Perhaps it was LIU’s famous hoop coach, Clair Bee, then ranked among the best in the nation. Bee led the Blackbirds to two undefeated seasons (1936 and1939) as well as to the 1939 and 1941 NIT titles. The NIT title then carried greater weight than the NCAA championship. Bee's teams won 43 in a row from 1935 to 1937.

As a New York City high school basketballer, I recall listening to Bee lecture at a Saturday morning clinic at Madison Square Garden. Short in stature, his most prominent physical feature was rapid-fire blinking. Far beyond normal eyelid fluttering, Bee repeatedly squeezed his eyes together. Between blinks, Bee told us that a winning basketball team must connect on one of every three shots. Consistent attainment of that .333 percentage was the key to victory, he said. Today, we’re despondent if the‘Cats hit less than 33% from beyond the arc.

It seems reasonable to assume that the prospect of playing for such a successful coach attracted White. The glamour of playing in Madison Square Garden might have been another motivating factor--so too, the chance to play nearer his Englewood home.

Years later, Severance spoke of the shadowy men who met White after his field house practices and spirited him around in their big cars bearing New York plates. Perhaps they had the greatest effect. 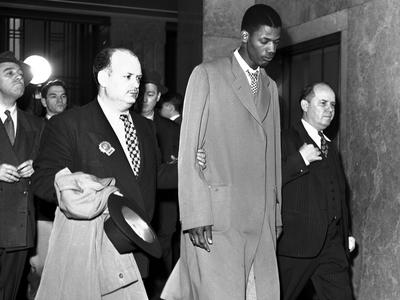 Whatever the stimulus, Sherman White made the LIU choice. It changed his life and ruined his chance of starring in the NBA. Yellowed sports pages report he got caught up in a point-fixing scandal that involved seven colleges, 32 players and more than 80 games. On Feb. 20, 1951, White and two teammates were arrested for taking money to shave points. How good a college basketball player was he? The previous day, The Sporting News heralded him as Player of the Year. He sported a points-per-game average of 27.7, almost 20% higher than Larry Hennessy who tops all Villanova ppg leaders with 23.2. 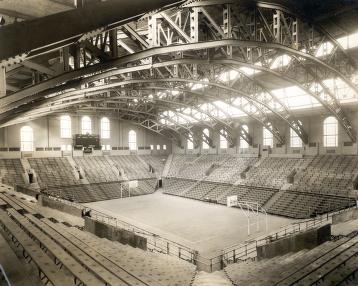 For Al Severance, White’s transfer may have been a disguised blessing. It’s possible it even laid the groundwork for the formation of the Big Five and helped build the reputation of Penn’s venerated Palestra as the temple of college basketball.

If Severance was to develop and maintain a strong intercollegiate schedule for his Wildcats, he needed to attract major schools. The Villanova Field House could seat no more than 3000 fans. Fine for games against nearby teams, it was inadequate for a visiting hoop power making a multi-game, eastern swing. These teams needed a larger venue, a building spacious enough to draw crowds that would help defray the expense of their long road trips.

With searing memories of men in black cars, Severance steered clear of downtown’s Convention Hall, home to St. Joe’s, Temple, La Salle and the Warriors. While Convention Hall could accommodate large crowds, even I noticed it attracted the same sharpies and betting types that overran Madison Square Garden. Severance would not have missed that.

He made it clear he wanted his teams to compete in a student atmosphere by working a deal with Penn. Let the other major schools keep Convention Hall, Villanova would play at the Palestra, giving Philadelphia fans college basketball doubleheaders just like Madison Square Garden--but on a college campus. Severance’s decision was brilliant. The Palestra was overrun with so many college kids; the gamblers never gained a toehold.

I recall early fifties’ Villanova-Penn doubleheaders where the ‘Cats might meet powerhouse Duquesne in the first game and Penn would play Duke in the second. With All-American Paul Arizin starring for Villanova, Nova fans saw the first game as the feature. Penn saw it differently. The National Anthem was played before the Penn game, giving fans the appearance that the Villanova game was a warm-up, not quite as important as the Penn game. Some sportswriters mentioned this, but Penn didn’t change it. And if Villanova or Severance complained, we didn’t hear about it.

I can’t be certain, but I believe the success of the Villanova-Penn doubleheaders led to the creation of the Big Five. The Palestra doubleheader format, pioneered by Penn and Al Severance, hasn’t changed significantly in more than 50 years of Big Five competition.

Over the decades, Villanova’s basketball program has had its problems: Howard Porter’s signing a pro contract while playing in the NCAA finals, Gary McLain’s cocaine, and later, telephone cards. Despite these troubles, Villanova basketball continues to be blessed.

And if, after seeing Villanova’s ’85 upset of Georgetown, you’re still not sure that some spiritual force guides Villanova basketball, consider this: When the great Sherman White walked off the Villanova campus, there was the even greater Paul Arizin, ready to fill the gap. Miraculous!"