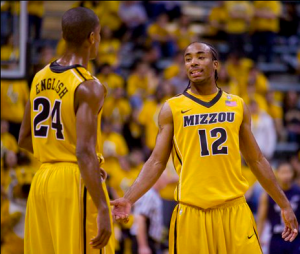 Villanova was able to keep things close with the Missouri Tigers for most of the first half, and had a 2-point lead with 6:52 left in the first half, but that was the last time they would hold a lead in the game. At halftime, Missouri had extended their lead to 13 points, 42-29, and then continued on to make it a 16 point game with 12:23 left in the game. The Cats clawed back from a big deficit to challenge Mizzou, but ultimately picked up their third loss, 81-71, at the Jimmy V Classic.

"We're getting better," Villanova's Jay Wright said after the game. ""We are getting better. It is a little embarrassing to say that when we lose by ten but that is where we are right now.

"The confidence we gain from this is that we – you’re not going come in here and beat this kind of team - you can’t press them – the guards are just too good. They have a lot of answers and you are not
going to just come in here and go up 20 on them. You just have to grind, grind, and grind and get it close
at the end and make some plays."

The 'Cats were again burned from 3-point range, with Marcus Denmon doing most of the damage for Mizzou, connecting on 6 of 10 attempts from beyond the arc. Denmon led his team with 28 points and added 6 rebounds and 3 assists. Much of the rest of the deep attack was produced by Kim English, who connected on 3 of 7 attempts, scoring 15 points, with 2 rebounds and 1 steal.

Despite their tendency to use four guard sets, Missouri actually started two big men. Power forward Ricardo Ratliffe was second on the team in scoring with 17 points, taking advantage of some brilliant passes to get the ball to him inside in position to score and capitalizing on opportunities to do so while Mouphtaou Yarou was on the bench.

Yarou was one of five Wildcats who scored in double-digits, with 11 points, 8 rebounds and 2 assists. JayVaughn Pinkston joined him in the starting front court, where he contributed 10 points, 7 rebounds and 3 assists in one of his better showings this season.

The 'Cats were led in scoring by three guards. Maalik Wayns again had the high score with 14 points on 4 of 11 shooting (and 42.8% from deep) and added 8 assists — his season high — but turned the ball over 4 times. Darrun Hilliard, who got the start over Dominic Cheek, scored 13 points, and added 2 rebounds, 2 assists and 1 steal. Cheek managed to score 12 more points coming off of the bench, grabbing 7 rebounds and 2 steals while shooting 5-of-11 from the field and 2-of-6 from deep.

According to Jay Wright, Hilliard was playing the game while suffering from a migrane headache.

Villanova recorded an assist on 60% of its field goals, showing a commitment to passing against Missouri that was not a hallmark of Villanova teams in years past. Wayns' passing helped that figure, but the team recorded 15 assists overall.

Missouri, meanwhile, had 23 assists in the game, 12 of which belonged to their point guard, Flip Pressey, who scored just 8 points in the game. Michael Dixon added another 7 assists for the Tigers, who were scoring at will for stretches. Whenever it seemed like Villanova was gaining some momentum, Missouri found a way to bury a big shot to halt the charge.

"Missouri is a great team and we're just going to learn from this," Dominic Cheek told reporters.

Among those lessons, Villanova will surely highlight each of the 15 turnovers committed in the film room. Mizzou only turned the ball over 9 times in the contest. One notable turnover occurred late in the game, while Villanova was on a run, trying to get back into the game. Wayns, with the ball in his hands, dribbled into the corner and was swarmed by Missouri. He tried a long pass to a teammate, but threw the ball across half-court, committing a backcourt violation.

"Maalik got trapped in the corner and we threw the ball away," Wright explained. "That was our chance. Their guards are really good."

Wayns admitted in the press conference that he should have called a timeout in that situation. Had he done so, the Wildcats would have had a chance to reset and maybe score a bucket instead of giving the ball away.

Another lesson to be learned is on defense. While the 'Cats have had moments of lucidity this season on the defensive end, they still struggle with good shooting teams. Against the Tigers, a weakness in transition was exposed as well.

The 'Cats also were beaten 14-10 on the offensive glass, which made every bad shot taken hurt more. The rebounding deficit was even more puzzling, given Villanova's size advantage. With both Yarou and Markus Kennedy, Villanova should have been able to win battles on the glass, but whether it was Yarou's foul trouble or Kennedy's nagging injury, the 'Cats won fewer battles than they lost — making missed shots sting even more.

Villanova, which has fallen to 5-3, has a long way to go to become the team that many fans and experts thought that they could be this season. Villanova will need a very good showing in conference play to continue their NCAA tournament streak.