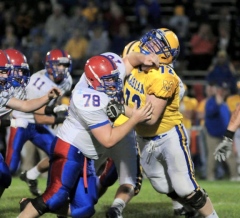 Villanova football landed a lineman with the requisite size to perhaps challenge for playing time early in his career. Jonathan Green of North Schuylkill might redshirt as a freshman, but he would prefer to play right away. At 295-lbs, Green has enough mass to compete on a CAA offensive line and after a year or two of Justus Galac's offseason program, he will likely be transformed into even more of a mountain.

Some schools were concerned about his height. Most schools look for linemen who are around 6-5, but Villanova turned the shorter Ben Ijalana into an NFL draft pick.

Green started all four years in high school and also made the first-team All-State in baseball. Andy Talley and the football staff viewed him as an all-around athlete because of that.

He was among the group of football recruits who spent the past weekend visiting campus. That group included both committed players like Mark Clements and Aaron Wells, and players like Green who gave his oral commitment on Friday.

Green said that he wants to be a civil engineer, and he won't be the only engineering student on the football team in 2012. Starting cornerback Craig James, for example, is also an engineering major.

At least one other player may have given a verbal commitment this weekend based on twitter reports. Villanova's other 2012 commitments are:

St. Augustin Prep in New Jersey wanted to make a splash with their football coaching staff after a mid-season shake-up . The Hermits were able to lure Villanova's defensive coordinator (for the past seven years) to come in as their head coach. Reardon had spent more than a decade working as the top defensive coach in Andy Talley's program prior to his departure. It is the second straight year that Villanova has lost a defensive coach in the offseason -- Clint Wiley left his post as linebackers coach last year to take the top job at Sterling High School.

Reardon lives near the Jersey Shore and the commute to Villanova, combined with the time, travel and recruiting, were tough on his young family. Going back to the high school ranks allows him to spend more time at home with his wife and children. He also gets to be in charge of his own program for the first time.

The program will now look to fill that spot on the staff, with a target of completing the hiring process by early or mid-January.

The announcement of Reardon's departure right before a major football recruiting weekend meant that coach Andy Talley's attention has been concentrated on ensuring that visiting recruits were impressed by their experience. As for whether the next defensive coordinator will come from inside the program, that decision has apparently not been made just yet.

Coach Sollazzo has the most defensive experience on the current staff, but has been a defensive line coach for his entire career. Linebackers and Special Teams coach, Billy Crocker, was being groomed as a potential defensive coordinator, but had just assumed his current job a year ago and might not be seasoned enough for the post. David Riede is another potential internal candidate, in his fifth year with the program, Riede has been both an offensive assistant and later the cornerbacks coach for the Wildcats.

It is unlikely that any of Villanova's offensive coaches would be candidates for the job, but wide receivers coach Brian Flinn has some limited experience as a linebackers coach at Mount Union in 1999. He is the only offensive coach who appears to have experience on the defensive side.

Last year, to replace Wiley, defensive line coach Crocker was moved into the linebackers and special teams opening, while Talley reached outside the program to hire Dave Sollazzo, who Flinn had coached with as a graduate assistant at Maryland. Sollazzo was let go by ther Terrapins when their head coach was fired and was lured to the Main Line to continue coaching defensive linemen and to lead recruiting efforts in northern New Jersey and New York.