Share All sharing options for: TERRIERfied! Nova comes back for blowout win 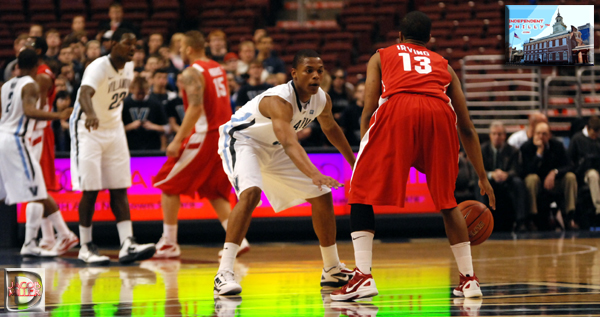 "This isn’t going to make us world beaters but it’s going to help us grow," coach Jay Wright told the media after his team downed an overmatched Boston University.

Villanova had to overcome some adversity in the game after coming out flat early in the first half. The 'Cats went down by as much as 9 points in the first half while struggling with their shooting and with stopping the Terriers' attack. After scrapping their way back into the game, Nova went into half time with a 3-point deficit, but came back from the break and outscored the Boston University Terriers 45-17 in the second half to finish a 68-43 blow-out win.

The 25-point margin of victory was a much-needed confidence boost for the Wildcats.

Villanova started Ty Johnson and Ash Yacoubou for the first time, in place of Dominic Cheek and James Bell. Cheek and Bell both played over 20 minutes off of the bench and played significant roles for the Wildcats despite not getting the start.

Villanova's shooting was terrible in the first half. They failed to score a field goal in the last 8 minutes of that half and missed 17 shots in a row before hitting a 3-pointer to take their first lead of the night with 17:17 left in the game.

BU point guard D.J. Irving led his team with 11 points, grabbed 3 rebounds and dished out 2 assists. Forward Patrick Hazel added 9 points and a team-high 5 rebounds. Six total players scored for the Terriers, but other than Irving, none were in double-digits.

Darryl Partin, a transfer from La Salle, had entered the game as the nation's 5th-best scorer, averaging 22.7 points per contest. He scored just 6 points in the contest, going 2-for-15 from the field and 0-for-8 from deep.

"We tried to keep fresh bodies on him," Wright said. "I thought we did a great job." 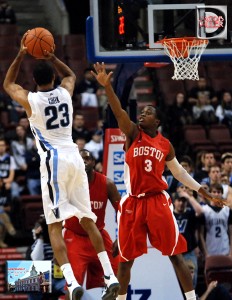 Villanova, meanwhile, had three scorers in double-digits, including a team leading 14 for Dominic Cheek, who started the game on the bench. He shot 42.8% from beyond the arc in one of his best shooting performances of the season. Cheek also had 7 rebounds.

While Cheek saw some success from deep the team connected on just 25.9% of its 3-point attempts. Fifty-two percent of the Wildcats' made field goals were assisted.

Maalik Wayns and Mouphtaou Yarou were also major factors in the offense as well, scoring 10 and 13 points respectively. Yarou had his 5th double-double of the season, grabbing 8 boards. He might have had the double-double locked down in the first half, but had to sit after picking up his second foul.

Villanova won the rebounding battle, 48-31, and grabbed 10 more offensive boards than the Terriers.

"We got turnovers, stops, out in transitions, easy baskets," Wright explained. "We haven’t been doing that."

Villanova's defense stepped up in a game where the offense struggled more than ever. The Terriers held Villanova to just 0.9 points per possession, despite an adjusted average of 1.10. Villanova struggled a bit with the BU zone defense, and especially because their shooters were ice cold (which allowed BU to concentrate on shutting down the dribble penetration). Villanova will need to improve their zone offense to beat teams like Syracuse, who play a zone both well and often.

The Villanova defense, meanwhile, held the Terriers to 0.637 points per possession, significantly-lower than their average of about 1.00. Had the 'Cats played as well defensively in the first half, they might have held them to even less.

Jay Wright will be looking for that defensive spark to emerge again on Saturday, when the Wildcats will play at Hagan Arena on Hawk Hill for the first time in program history. St. Josephs had previously played all of its Big 5 games at the Palestra, but changed that policy this season.