Giving a Gift of Life on Christmas

Share All sharing options for: Giving a Gift of Life on Christmas

Matt Szczur brought the bone marrow registry an unprecedented amount of publicity when he agreed to donate his marrow to an anonymous young girl in the middle of his team's run to the FCS National Championship. That publicity was the culmination of 20 years of effort by Andy Talley, who has operated one of the biggest annual bone marrow drives out there.

"Be the Match, they fund me to the tune of about half-a-million per year," Talley noted. "My 32 teams, if you multiply 8,500 people by $100 [the cost of each test], that’s over half a million dollars [ed. note: it is a bit of an understatement to call that "about half-a-million."]. Be The Match funded all that.

"I’m their biggest guy in terms of getting bone marrow testing done. Nobody does more than me and that’s how I want it. I could take it across the country, but the problem is that they don’t have the money to support me. They held me at 32 teams." 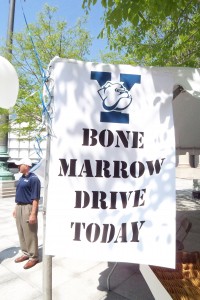 Talley's marrow drives had been able to operate for years with just the backing of the marrow registry. He recruited coaches at other schools to join the effort, which is particularly effective because college students who register can stay on the registry for the next 40 years.

The only thing that has held Talley's Get In The Game program back has been the cost of testing. The Andy Talley Bone Marrow Foundation is designed to help with the program that tests thousands every year.

"They can pull out anytime and say, ‘funding has dried up we can’t do it anymore,’ so I want to make sure that it’s always being done at Villanova every year," the coach said.

The foundation supports the Get In the Game program, as well as other bone marrow-related causes. Last year they sent a $2,500 check to a Pennsylvania woman who had to move to Seattle for a marrow transplant and treatment. The check will go toward covering her and her husband's expenses. They have also supported other marrow drive efforts.

"One of our former players, Greg Bishop, he was a linebacker, he works for Cintas and he had a Bone Marrow drive at his plant. So we gave him some money to assist in that as well."

The Foundation undertakes fundraising efforts, headlined by the spring "Bash," to be held for the second time on March 3rd at Villanova. The Bash is a casual night of dinner and dancing that also features a raffle and silent auction to help raise money.

"The Bash is a good way to help those three pieces of the deal that we do," Talley said.

"It’s just a fun event, and it’s a fundraising event as well with a silent auction. Ours is fun. Its not business casual, just party-casual I guess; no ties. Last year we had 350 people, Brian Westbrook was there, it was our first year and we were really excited about it."

It says a lot about the program that former players like Bishop and Westbrook have stayed involved. Especially because Talley hopes to have the program continue well beyond his tenure. Building a tradition and infrastructure to support the program is important.

"I just started my Bone Marrow foundation in the last year because, you know, I figured, when I go and I’m not here anymore, that there will be enough money for someone at Villanova –hopefully the football coach – to carry on that mission because it will become part of the fabric of what we do at Villanova."

"I want to make sure that it goes on beyond me."

Talley is proud of where his program has gone and he knows that he is doing important work when he is away from the football field.

"We’ve saved a lot of lives, no question. I think we’ve tested over 20,000 people in the last three years." 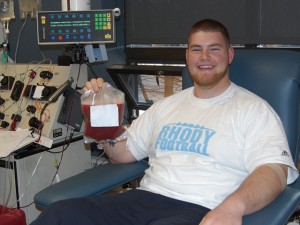 The Get In the Game program has produced multiple donations, not just Matt Szczur. Two players from Penn donated marrow recently, Delaware had a player who gave marrow this year, West Chester University had three players who donated and players from Ursinus, Virginia and Rowan have all helped save someone's life. Publicly, we only know about the athletes who donate because privacy laws prevent the foundation from obtaining information about other donors.

"God knows how many lives we’ve saved, because you know, people who come to our testing – we tested over 700 people last year at the Connolly Center in the spring — unless any of our actual players are called, I don’t know, there could be some students at Villanova. . ."

This Christmas give the gift of life.

For more information on the Andy Talley Bone Marrow Foundation, check out www.TalleyBoneMarrow.org. Donations to the foundation are accepted year-round. Talley also hopes to have VUhoops readers attend his Bash on March 3, 2012.

If you are healthy and between the ages of 18 and 60, please consider signing up to join the marrow registry. The process of registering is quick and easy.