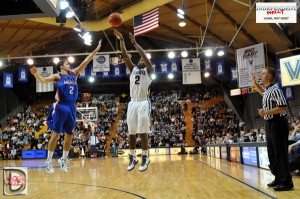 On November 11th, expectations were high for Villanova's season. Prior to and immediately after that opening game, a 106-70 walloping of Monmouth University, fans and pundits alike were discussing what seed Villanova would receive in the NCAA tournament, or how high they could climb in the Big East standings. Since then, the Wildcats have fallen from grace.

After starting 3-0 with wins over Monmouth, La Salle and Delaware, Villanova won just one of three games at the 76 Classic in Anaheim, California. After returning from that tournament, they lost three of six non-conference games, including two Big 5 games and a big-ticket contest against a ranked Missouri team in New York.

Early on, the Wildcats have struggled on the perimeter, both offensively and defensively.

Dominic Cheek has taken more 3-point shots than any other Wildcat, but has made just 29.7% of those. Maalik Wayns is not far behind in attempts but has connected on just 27.1%. JayVaughn Pinkston has connected on 41.7% from deep, but took just 12 of those shots. Darrun Hilliard is shooting 37% from beyond the arc, but has just 17% of the team's attempts. Offensively, these trends cannot continue. There is no Allan Ray or Corey Stokes to make a high percentage of attempts from deep on this team and while shooting from outside shouldn't be banned, it should be relegated to a secondary option.

Defensively, the Wildcat's opponents have tended to light them up from the 3-point arc in losses and wins alike. The 'Cats have struggled to control good perimeter shooters, often giving up excellent looks during switches and in transition.

That said, the 'Cats have shown some signs of hope. Excellent defense helped the 'Cats beat Boston University, but that defensive improvement didn't last against St. Joseph's University a few days later. Defense was again the story of the game against American University in their non-conference finale, holding the AU backcourt below its season average for outside shooting and building a 21-point lead.

Consider the opponents, however. Villanova has struggled with athletic teams with strong outside shooting and there remain many questions about their ability to do so going forward.

It will help to get players healthy. Almost all of the Villanova big men have had one ailment or another early this season, the most recent being a sprained ankle that has affected Mouphtaou Yarou (just 3 points against American).

It will be more important to learn from the earlier mistakes and to work to improve the offensive and defensive execution and preparation going forward.

Villanova was picked to finish 8th in the conference in the Big East's preseason poll. Now, Ken Pomeroy's website lists Villanova as the 10th-best team in the conference, based on a statistical analysis. None of these rankings or projections are infallible, however, but they present an interesting glimpse into where things stand at any one moment in time. Villanova is 10th out of 16 Big East schools right now, the question that Jay Wright and his program needs to be concerned with is, "Can they do better."

The Big East schedule starts tomorrow, with Villanova opening its slate at West Virginia on Wednesday. What are the Wildcats capable of in the next 18 games? What do you expect?