How does Jay Wright stack up?

Share All sharing options for: How does Jay Wright stack up? 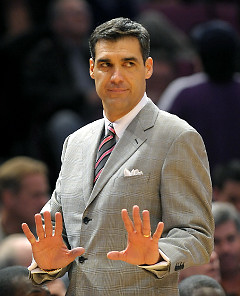 There has been much conversation lately among disappointed Villanova fans about whether the current downturn has been the fault of the head coach. Jay Wright has always walked on thin ice at Villanova, with calls for his job coming shortly after starting his run on the Main Line with a big recruiting class and three consecutive trips to the NIT.

Then, things took off. He took the Wildcats on a seven season run of 21- to 30-win seasons, NCAA bids and postseason runs. It made his reputation as a superstar.

The last two seasons of that run were two of just three in that span where the Wildcats didn't make it to the second weekend of the NCAA tournament, and they collapsed late in both seasons. This season has started off with a whimper and has shown only a precious few signs of hope moving forward.

How unusual is it for a coach and a program to take a dip like that?

Mike Kryzewski hasn't missed a trip to the NCAA tournament since 1996, but that is perhaps a unique situation. The standards are a bit different for an elite program headed by an elite coach who tends to get his pick of the best recruits in the country. When Coach K failed to get past the first weekend in 2007 and 2008, it was a let-down. Getting blown off the floor by Villanova in the 2009 Sweet Sixteen was another low-point for a team that is annually expected to be among not just the top 25, but the top 5 or 10 in the nation.

UConn has missed the NCAA tournament seven times since Jim Calhoun took over in 1986. He followed up a 2009 Final Four with a trip to the NIT in 2010. In 2007 his Huskies didn't make it to any post-season tournament and only managed a first-round exit in 2008.

Jim Boeheim won a National Championship in 2003 and then didn't get past the first round in either 2005 or 2006. It took a Big East tournament run fueled by Gerry McNamara willpower to even make it to the 2006 tournament. In 2007 and 2008, Syracuse appeared in the NIT rather than the NCAA tournament.

Nobody looked to fire Boeheim in 2008. Nobody even questioned his undying devotion to the 2-3 Zone. They accepted the coach for what he was and eventually he got the program back on it's feet among the elite.

Almost every head coach of an elite college basketball program has had seasons where his team didn't quite click. Seasons where the execution was off, things went wrong, or bad decisions caused them to fail to live up to expectations. Sometimes they even string a few of them together.

This isn't a defense of Jay Wright. The last two seasons ended with his team playing its worst basketball rather than its best. This season, meanwhile, is just a terrible mess for a team that is stocked with highly-rated recruits. There have rarely been teams in the Jay Wright era with so many 4- or 5-star talents.

What this is, is a reminder that the calls for Jay Wright's head are perhaps premature. Villanova isn't Duke, Kansas, or UNC. Villanova's last run of seven consecutive NCAA tournament bids was under Rollie Massimino from 1980 until 1986, who followed that run with three NIT bids in six years. Even Jack Kraft, who won about 72% of his games at Nova, or Alexander Severance never quite had an elite run like that.

2010 and 2011 were ugly for the Wildcats, but they were still 25 and 21-win seasons, respectively. Both ended well enough to warrant a tournament bid. If Jim Boeheim could replace his run from 2006 through 2008 with what Villanova did the past two years and this season, there is a good chance he would take it.

The sky is not falling and Jay Wright's seat is not hot. He has time and a recruiting class or two to get his program back on top. A coach that took a scrappy underdog team filled with unheralded recruits to a Final Four has earned a little bit of slack. Even if you impute those successes on his assistants, remember that the head coach hires his staff — he is CEO of the program.

Does Jay Wright make decisions that frustrate fans? Absolutely, but without Wright's 7-year run, would Villanova fans even be in a position to expect a bid to the NCAA tournament in any given year?

While it is fair to be disappointed, it is shortsighted to be looking at head coaching resumes so soon. Jay Wright isn't finished yet.