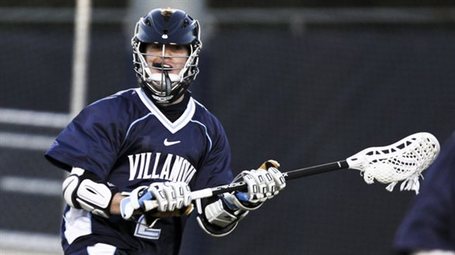 The tough times against top-ranked competition continued this afternoon for men's lax as Villanova fell 12-8 to Notre Dame in a tough Big East lacrosse matchup. I had the fortune of watching the game this afternoon thanks to Notre Dame's internet feed.

(Hint, hint Villanova - it's just not that hard to stream your sports online. And if you did, people would pay for it)

Either way, 'Nova jumped out to a fast 1-0 lead in this game and extended it to 4-2 behind goals from Jack Rice, CJ Burke and CJ Small. Things were looking great. Then, just like basketball season, things took a turn for the worse. ND began asserting itself in the game and cut 'Nova lead to 5-4 before finally claiming control by holding a 6-5 at the half.

The 2nd half was unfortunately more of the same as 'Nova struggled to find it's offense and ND continued it's presence in the offensive end to close out the game 12-8.

As I've said before, I'm certainly no lax expert, but the one odd thing that Villanova kept doing was double-teaming the ND forwards, which of course then freed up ND for numerous shots on goal. I know we're one of the leading teams in causing turnovers, and this is the first game I've seen live, but it seemed like a change of strategy was in order.

The team is back in action next Saturday as they close out the non-conference portion of their schedule by hosting Delaware.