Share All sharing options for: Villanova vs. Temple Football Tickets

Tickets have been on sale for a while, but it bears mentioning that there are plenty of GREAT tickets left for the Villanova Wildcats-Temple Owls football game taking place on Thursday, September 1st at Lincoln Financial Field in Philadelphia. The Battle for the Mayor's Cup will begin at 7 p.m. 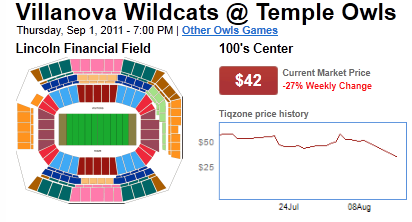 If you check the Villanova tickets center here at The Nova Blog, you'll see that tickets prices for the game are down on 27% on average from a week ago - so it's a great time to buy. Tickets in the lower bowl can be had for as low as $22 dollars a piece.

Time to get out and support the team in a big way as we continue our attempt to join in the Big East expansion effort and officially join the Big East as a football member. Do what you can to show that 'Nova football has a big following and that as a fanbase we're ready for the move up!