#14 Marquette Wins, But Cats Give Them A Game

Share All sharing options for: #14 Marquette Wins, But Cats Give Them A Game 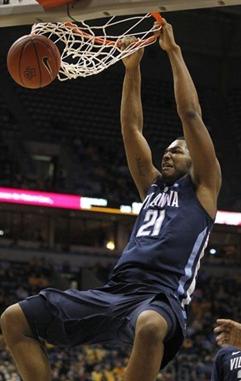 With low expectations for this game, ‘Nova fans had to be encouraged to see Villanova down by only 3 points at intermission. However, the Cats came out flat in the second half, as Jae Crowder lead a surge by the Golden Eagles, who scored nine straight points to take a 49-37 lead. At that point, I prematurely settled on the title for this post: "A New Year, But It's Déjà Vu All Over Again." But then a funny thing happened with 15 minutes to go in the game. The Cats finally showed some fire.

It began with a three point brick launched by Dominic Cheek, one of six that he would miss on an awful shooting day. However, Kennedy stepped in to grab the rebound and passed to a cutting Darrun Hilliard for a layup. Kennedy was the bright star on the day for the Cats, enjoying his best day in a ‘Nova uniform. He saw 25 minutes of play and rewarded Coach Wright for his confidence by scoring 8 points on 4-5 shooting and grabbing a team and career-high 12 rebounds, 7 offensive, had 4 blocks and played solid defense.

Foul trouble for Cheek and Wayns, combined with spunky play by their freshman understudies, was the context for a game that saw the freshman play over 60% of the team minutes for the Cats. Hilliard scored 12 points (4-7) before fouling out. Pinkston had a career-high 13 points on 4-9 shooting, including a thunderous dunk. Yacoubou played well with 8 points, on 3-6 shooting including 2-5 from long-range. Offsetting all the good, Pinkston and Kennedy had four turnovers each.

With Wayns and Cheek fouling out to join Johnson and Hilliard, an unusual collection of Cats battled in the closing two minutes without a point guard. Dallas Oano saw a minute of meaningful time as an additional ball handler to complement JayVaughn Pinkston and Ach Yacoubou, who collectively did a great job pressuring Marquette.

Jay Wright said afterwards. "We didn't play 40 minutes but we did play the last 4 minutes of each half. When you're talking about these things, that's not a good sign, but I do see signs of promise in this group. We don’t have any glaring weaknesses but we’ve got a lot of little weaknesses -- turnovers, shot selection."

This may well be a season where we savor moral victories, and this one was a moral victory indeed as the Cats seem to play their best against ranked teams (albeit not well enough to win so far). The improved play of the freshman overshadowed a disappointing day for Cheek and Wayns and a mysterious disappearing act by sophomore James Bell (3 minutes of PT and goose eggs in the box score).

Next up is South Florida at home on Thursday, the Cat's best chance so far for a Big East win.