Share All sharing options for: Villanova Listed by Top Recruits 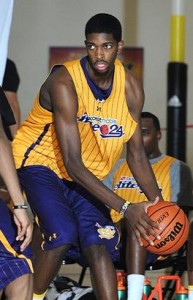 When choosing a college, high school players consider a lot of factors beyond, "how good are they?" They visit campuses, talk to coaches, think about who they want to play with. It's a process that for top recruits can be long and drawn out. Guys like Amile Jefferson will get to play no matter where they go and in all likelihood, most of those games will be nationally televised. NBA hopes for kids recruited at that level depend more on execution once they get to college than on their ability to get exposure — NBA scouts will see Amile Jefferson, chances are that they already have.

There is also the dark side of recruiting. Boosters get involved in recruitment of some player, agents and their runners for others. Promises are made, payments are tendered, and programs take risks — usually with the coach at arms-length or further from the dealings. This is how some coaches always seem to be around programs under investigation without ever being directly implicated.

So while Amile Jefferson has previously stated that he wanted to decide on a school in the early signing period, he understandably has a lot on his mind to consider. Nonetheless, the Philadelphia-area star has begun to narrow his list of options down. According to ZagsBlog.com, Jefferson has cut Stanford from his list of possibilities.

The 6-7 forward will decide between Villanova, Ohio State, Kentucky and N.C. State. Temple also remains on his list but has been reported as a "long shot."

Villanova isn't the favorite at this point either, but despite the reports from another Villanova blog that the 'Cats are "out," the Jefferson camp has not yet eliminated the Main Line school. More telling, however, is that Jay Wright hasn't backed off from the talented high school senior. Wright was in the gym to watch Jefferson's Friends Central team beat Neshaminy this past Friday.

So either Jay Wright has been wasting his time or Villanova is still in the picture — even if the photographer partially cut off an arm.

Nova makes the cut for Williams 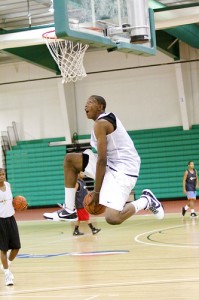 Five-star small forward prospect, Troy Williams has been one of the most impressive players in the class of 2013 and has received interest from some of the best schools in the country. Over the summer the Phoebus, Virginia-native joined the Boo Williams 17U team (playing up one age-group) on the AAU circuit, and along with his teammate Anthony Barber, he turned a few heads.

Williams is an explosive scorer with an ability to shoot out to 22-feet, though he can be streaky at times. He can put the ball on the floor, but has a little room to improve his dribble at the next level. He is a superior athlete on the court with multiple tools to help him.

As good as he has been on the offensive side, he says that prides himself on his improved defense.

When I saw Williams back in early May, he didn't mention Villanova among the schools that were recruiting him. He listed Georgetown, Virginia Tech, UVA, South Florida, Texas and UNC as schools that had offered or been in touch at that time. He released his "final" five choices on Twitter on Friday and Villanova was among them.

The Wildcats weren't the first school in on Williams, but they have clearly made enough of an impression on the player to be considered along with North Carolina, Kentucky, Georgetown, and Virginia Tech.

So far, he has visited all of the schools on his list other than Villanova. He may be waiting to take an official visit to see the Main Line school, since his travel expenses can be paid for his travel from his home town over 5 hours from Philadelphia.

Williams is one of the top-10 players in the class of 2013 and second at his position according to ESPN.