'Nova Can't Keep Up with USF

Share All sharing options for: 'Nova Can't Keep Up with USF 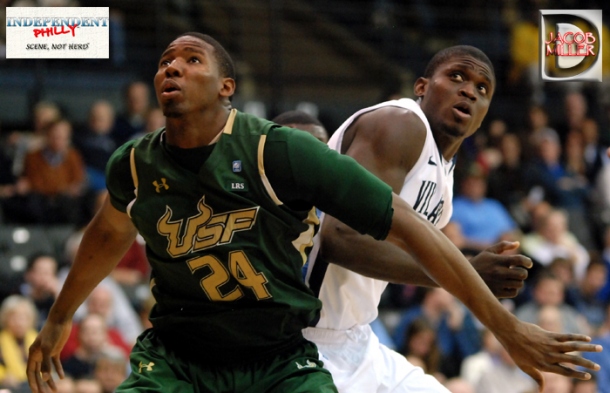 A late run by USF cemented the Bulls' second ever (and second consecutive) win over Villanova as the visiting team walked out of The Pavilion 74-57 winners.

After freshman JayVaughn Pinkston went on a streak scoring 7 of his 12 points during a 9-0 'Nova run, the Wildcats clawed to within 3 with 8 minutes to play. From there, USF outpaced VU 24-10 for the balance of the game. The loss drops 'Nova to 7-8 on the season (0-3 Big East).

Maalik Wayns led Villanova with 17 points, but the Cats' shooting woes continued as Jay Wright's squad went 4-20 from behind the arc (Wayns was 3-5). Outside of the long distance shooting, Villanova shot nearly 50% from the floor (16-33) with their inside game.

USF outrebounded Villanova 36-18 as they minimized the Wildcats' second-chance opportunities.

Jawanza Poland led the Bulls with a career-high 20 points. Villanova next hosts DePaul at The Pavilion on Sunday. Tipoff is slated for 12 noon.