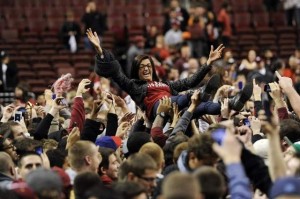 When Villanova notes its home court in media guides, they usually include a second line claiming the Wells Fargo Center in South Philadelphia as a home. In recent years the Wildcats have played anywhere from 3 to 5 games in addition a preseason exhibition at the cavernous venue and have generally drawn large crowds to see some of their premium games.

The Temple Owls have normally played their home games at the Liacouras Center (seating about 10,200) on their campus. Though that arena is sufficient for most of their Atlantic 10 opponents, it is not large enough to entice blue blood programs like Duke to come to Philadelphia.

In order to host last night's upset win over the Blue Devils, Temple arranged to use the Wells Fargo Center and management there turned it into as much a Temple home court as possible -- video screens were set to cherry and white themes and the court logos were changed to include a large Temple "T" logo at center court, "Temple" written across the two ends of the court behind the baskets and A10 and Under Armour logos in the key.

That, however, wasn't a once-in-a-lifetime event for the Owls. They will play a home game at the Wells Fargo Center again next year when the University of Texas makes a return trip on their home-and-home series.

Is Temple planning to make a Wells Fargo Center game an annual tradition? Will they expand their schedule there in coming years?

Villanova doesn't control who gets to play games at the arena, but could an expanded Temple schedule in South Philadelphia have a negative impact on Nova? What if a Villanova Big East game was bumped and forced to the Pavilion so that Temple could host Duke or UNC? The impact on fans (fewer tickets available) and the program (less profit from a big game) could be troubling.

Presumably, however, the Wells Fargo Center would work with both schools and their respective conference offices to ensure that there would be no overlap in choice dates. The Big East already works with professional teams in the NBA and NHL when constructing its schedule, so working around Temple as well might not be a problem.

How do Villanova fans feel about potentially sharing the Wells Fargo Center as a "second home?"