Share All sharing options for: That Blue Blue Demon Feeling

While the Wildcats were imploding against South Florida on Thursday, the thought came to mind, "What if they don't win a Big East game?" 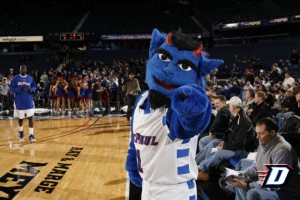 DePaul is a school that knows plenty about being in the basement of the Big East. Since entering the Big East in 2005-06, their best finish has been in ninth-place and have finished dead-last more than once.

This season, however, the Blue Demons look much improved, coming into the game with a 10-4 record, including a 1-1 conference mark. They took down a struggling Pittsburgh team in Chicago on Thursday to open their Big East account early this season. Oliver Purnell has begun to bring the program back to life.

He has three main scoring threats, with Cleveland Melvin leading the way at 18.9 points per game and Brandon Young a close second with 16.8. Jeremiah Kelly scores 10.2 points on average and also contributes a team-high 4.1 assists per contest.

Overall DePaul is an above-average offensive team that scores about 1.05 points per possession. They shoot 33.8% from the perimeter, which is just below the Division-1 average. That is about the same percentage that Villanova's opponents have shot from distance. Their biggest threat from distance has been Kelly, who has made 39.2% of his attempts. Jamee Crockett has connected on 38.2% and Moses Morgan has made 36% to round out the Blue Demons who have shot better than average.

Their defense ranks 232nd in the nation, but they have been much better at defending the perimeter than defending inside. Opponents have connected on just 29.5% from outside while from 2-point range, they have scored 51.1% of the time.

Villanova is likely to struggle again. While many took some positives from the Wildcats' first two Big East games, which they kept close for about 75 minutes in all, the South Florida result was a wake-up call. Villanova does not appear to be ready for the challenges of Big East play this season.

Neither the Villanova defense nor the offense has really clicked so far.

Defensively, Nova has allowed its opponents to get good looks from outside and benefit from matador-style plays inside, especially when they go "small." The commitment to defensive effort that has existed on past successful teams seems to have dissipated completely. The 'Cats will need to upgrade their dedication on that side of the ball if they hope to compete in their remaining games.

Good defense will aid a reeling offense as well. Villanova has done well scoring in transition before opponents can get their defense set. Those transition plays are more likely after a turnover, of course.

Most notably, however, Villanova has performed impossibly bad shooting from the perimeter. Villanova lacks a true threat from outside and though Jay Wright was hoping that having multiple players taking shots from deep could help, it has only seemed to cripple the offense more. Often times, players can be spotted taking a 3-point jumper after just one pass, early in the shot clock, while they aren't open or before they are squared to the basket. Few of those shots go in. Against USF, the 'Cats grabbed so few offensive rebounds that those shots were essentially the equivalent of handing the ball to the other team.

Worse, however, is Villanova's unimaginative zone offense. Opponents will continue to heavily use zone defenses against the team until they begin to look confident an capable in attacking the zone. In the recent past, players like Corey Stokes have been key to Villanova's zone offense, shooting over the zone to take advantage of the scheme's weakness.

Instead, Villanova needs to learn how to use the high post to get an advantage against zone schemes that tend to leave it open. Most of the time, against the zone, getting the ball to the high post using a dribble-drive or a quick pass to a big man moving up or a guard cutting in, allows you to get the ball into an uncovered portion of the key and disrupt the scheme. Villanova seems to keep the ball on the perimeter in these situations and often looks confused.

It isn't just scheme, however. Villanova played well for the first 5 minutes or so against USF, before Maalik Wayns and Dominic Cheek returned to the line-up. Despite being two of the team's leading scorers, it seems that the Ewing Theory is in full force when either or both are on the court. Both take an large percent of the team's total shots in each game, and both seem to be largely inefficient when doing so. When the freshmen players were left to their own resources, giving the ball to Wayns or Cheek to take the shot was not an option; they had to share the ball and create shots for each other.

In other words: Villanova needs to get some confidence and some chemistry in place if they are going to learn how to win, especially if they need to win without the 3-ball.

Sunday's match-up with DePaul will likely be a tougher game than anyone had it pegged for prior to the season. Ken Pomeroy's statistical models predicts a Villanova win with 80% certainty — it was even more certain that USF would lose, however.

The game tips off at Noon on Sunday, January 8th at the Pavilion and will be broadcast locally on WPHL-17 and nationally on ESPN3.com.