Villanova opens its Big East account with win over DePaul 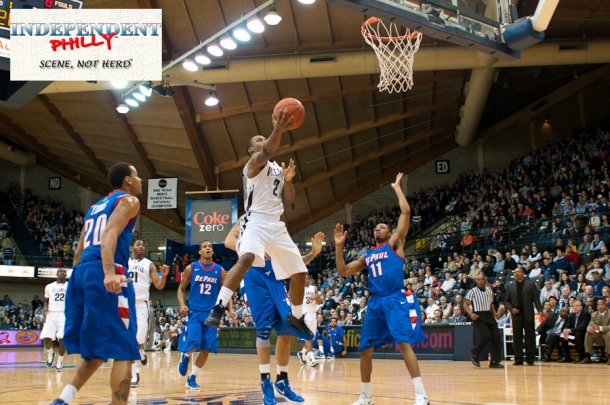 Villanova broke the DePaul press and took advantage of some easy shots to down the Blue Demons of DePaul, 87-71 — their first win of the Big East season. Villanova took the lead on the first possession on an old-fashioned three-point play by Mouphtaou Yarou. The 'Cats held on, going to 10-0 by the first TV timeout. DePaul wasn't going to give up, and got as close as 1 point in the middle of the first half before Villanova pulled away again.

"We were prepared. We just wanted to keep getting better," head coach Jay Wright said about the victory.

Wright started Ty Johnson and Markus Kennedy and left them on the court for 33 and 34 minutes respectively. The only player who spent more time in the game was Maalik Wayns, who had 35 minutes of action.

"We were trying to get to this [lineup] gradually," Wright said. "When I say try to get to this, I mean get another ball-handler in there with Maalik to take some pressure off.

"We still play him at the point some, and then get Darrun Hilliard off the bench too because he can play both spots. We were trying to get to this point, but Ty wasn't ready, he had to earn it, and also Markus [Kennedy] and JayVaughn [Pinkston] had to get there and earn it. That's how you do it in our program and I think they've earned those spots."

Pinkston played 18 minutes for the Wildcats off of the bench and scored 13 points to be one of four players who broke into double-digits on the team. The others were Wayns, who led with 21 points, Cheek with 20, and Yarou with 14.

"This was a good line-up for us. This is what we were trying to get to."

Wayns was very positive about Johnson's contributions at the point, where he had a team-high 5 assists (all in the first half) and 2 steals.

"I'm like a scorer at heart," Wayns said with a chuckle. "He helps me, he's a great point guard who can get me shots, and that allows me to get off the ball and get up shots and still get other people shots."

Villanova held a 48-36 lead at half-time, but their offensive production declined a bit in the second half as the 'Cats tried to slow the game to let the clock run out. After connecting on 62.5% of their field goals and 66.7% from deep in the first half, the 'Cats went 0-4 from downtown in the second half and shot just 50% from the field.

Despite going just 13-for-26 in the second half, the 'Cats made 92.9% of their free-throws after the intermission and 79.4% for the game. They scored 27 points at the charity stripe with Yarou and Pinkston getting 6 free throws each and combining to make all but one. More importantly, Villanova's guards made half of the team's trips to the line by driving to the hoop, scoring 15 points from there.

"Most of the game they were pressing us, but we were breaking the press and taking it up for lay-ups," Cheek told reporters. "You know if our shots aren’t falling, we’re still going to continue take them or we can drive to the basket and make plays."

While Villanova had 34 attempts from the free-throw line, the Blue Demons took just 17.

The Blue Demons were handcuffed on defense with five players with four or more fouls during the game. Key players like Cleveland Melvin and Derrell Robertson picked up their 4th fouls early in the second half and Robertson ultimately fouled out. The foul margin — DePaul had 29 to Villanova's 18 — didn't trouble Oliver Purnell, however.

"We press and turned them over 28 times as well, that may account for some of that disparity," he noted. 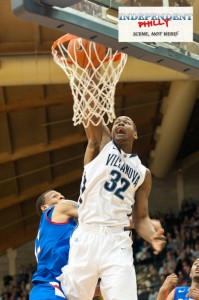 Jay Wright was impressed by the fast pace of the game that helped force his team to cough the ball up on 28 occasions.

"That’s them. I give them a lot of credit, they were 17 [assists] and 14 [turnovers], they’re good that way and they’re used to playing that way," Wright noted. "We don’t mind playing that way.

"It kind of forced us to just play basketball and not run cuts, because they don’t let you."

Despite the turnovers, DePaul was not able to take advantage. Villanova got back quickly on defense and the Blue Demons connected on just 38.2% of their shots and only 29.6% from beyond the arc.

"These guys really, defensively, did a great job getting the team playing," Wright said of his juniors. "We held them to 38 [percent shooting] and did a real great job rebounding."

Wright wouldn't accept it as an excuse that the Wildcats had to integrate new players into the line-up as the reason for their defensive woes this season, but he did say it was a challenge without a lot of veteran leadership. Communication and teamwork are important factors in playing effective teamwork, and while Villanova hasn't been very good at it so far this season, they did a good job of it today.

Getting things right within the family - USF Redux

"The thing about the USF game was that we were getting better and we took a step back," Wright said. "We needed to get things right within our family."

Asked to expand upon getting things "right" in the family, the coach attempted to explain the events that caused his two junior guards to sit at the outset of the previous game.

"This is simple, just that we’re asking Maalik and Mouph and Cheeko, we're asking them to act like you're a senior, and practice every day like seniors, like we always have with our seniors. And we tell them its hard and you're not ready for it yet, but we're going to try to teach you fast and we're going to ask you to do it fast.

"That was thing with the South Florida game. They didn’t do anything, we just had a film session, I said we needed to do some things in practice. They didn't do it the way I wanted them to as leaders.

"Being a leader is a lot of responsibility and it's a privilege to start."