Closest to the Pin Round 9: Syracuse (Rivalry Game with Bonus Points)

Share All sharing options for: Closest to the Pin Round 9: Syracuse (Rivalry Game with Bonus Points)

VUHoops vs. Vegas: Based on the average predicted scores of the VUHoops Crowd and the posted Vegas line, we would have had a DOUBLE-LOSS by betting Villanova +9.5 (LOSS) and the Over (LOSS). The details follow. With the double-loss, we fall to -$400 for the season. 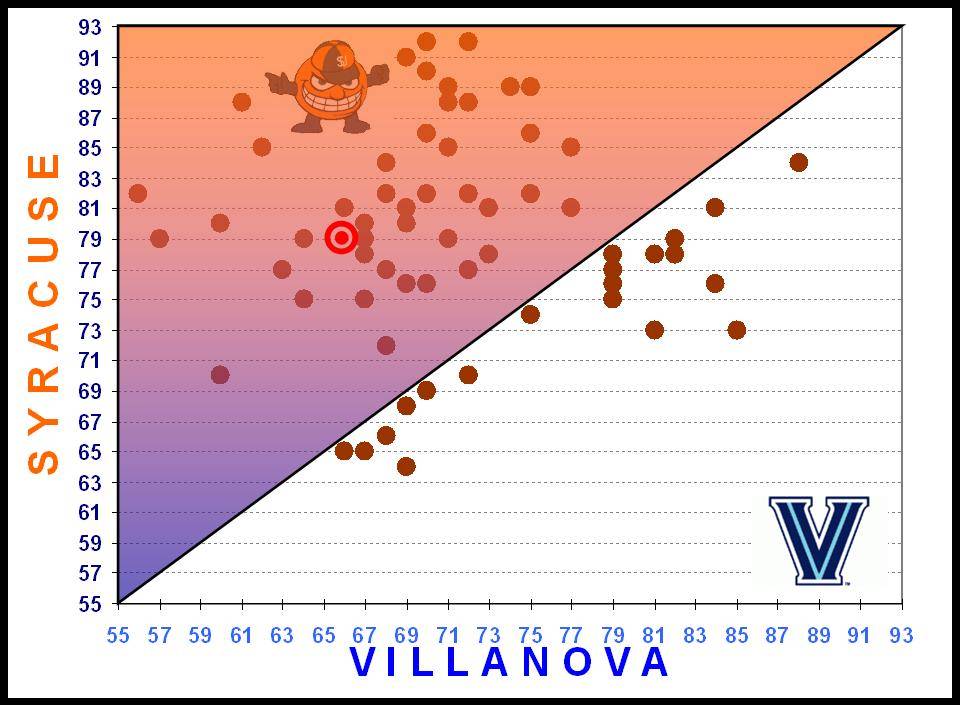 Window Opening (Monday, January 9, 6:00 PM) The window is now open for readers to post their predicted final scores for ‘Nova’s big game against #1 Syracuse on Wednesday at 7:00 PM (Wells Fargo Center, ESPN2) in our Closest to the Pin Contest. Scott0220 remains alone are in first place with 10.0 points. Click here to see our updated leader board.

Syracuse (17-0, 4-0) is ranked #1 in both the AP and ESPN/USA Today Coaches Polls, but is ranked #4 by Kenpom.com. The Orange have an RPI of 1, a SOS of 1, and are scoring an average of 80.6 PPG while giving up an average of 60.2 PPG. Their seventeen victories have come as follows (games listed chronologically):

Be sure to check out Brian’s game preview on Tuesday.