Share All sharing options for: KrisJo & Co. come to Philly 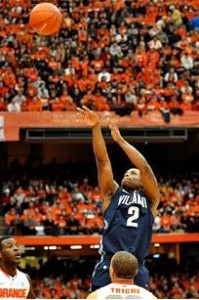 Syracuse is back on top of the world and the Associated Press polls and at 17-0, it is hard to say that the Orange aren't capable of matching their hype. They rank 3rd in the nation in offense and fifteenth in defense. Villanova rates considerably lower in both categories.

When the Orange comes to Philadelphia on Wednesday night, it will be first time that the Wildcats will face the current number-one ranked team since February 2006, when the Wildcats last stormed the Wells Fargo Center Floor. It will be the 20th time that a Villanova team has played a top-ranked opponent, though the program has hardly been David against those Goliaths, going 5-14 all-time against the Associated Press #1.

For the Orange, senior forward Kris Joseph leads the way with 14.1 points per game along with 4.9 rebounds. Dion Waiters adds 12.5 points per game and 3 assists in the Syracuse backcourt while junior guard Brandon Triche accounts for 10.6 points, 2.5 rebounds and 3.1 assists per game.

The impressive thing is that Waiters does that off of the bench. Scoop Jardine starts at the point alongside Triche.

Though the Orange have only three players who average double-digit points, they are deep, with bench players who can make big contributions on any given night, as evidenced by Waiters. Another example is forward C.J. Fair, who is second on the team in rebounding despite not starting.

Syracuse can take advantage of a team from the perimeter, shooting 37.3% as a team but having 5 players connecting on more than one third of their attempts. That includes Kris Joseph and Brandon Triche, who have each made 42.6%.

Defensively, Syracuse plays primarily in one of the toughest 2-3 zones in America to crack. Their opponents have scored just 60.2 points per game against them, though conference opponents (all four of them) have fared just slightly better with 64.

In the past the Wildcats have relied on outside shooting to crack the Syracuse zone. This season that option will not be as fruitful — the 'Cats are shooting just 30% from beyond the arc with just one player connecting on more than one third of his attempts for the season (James Bell with 33.9%). That difficulty has caused the Wildcats to look lost against zone defenses for most of the season.

If the distance shots aren't falling on Wednesday night the 'Cats will need to find another way to attack the zone.

Getting the ball into the high-post may create some options. Once the ball is in the high-post, the zone defenders have to react. If they do not, there will be a very wide open 15-foot jumper for the high-post player. Another shot that could open up is in the low-post, if a defender comes out from there to cover.

More likely, however, those shots will open up on the wing, where someone will have to take them. Based on Villanova's abysmal outside shooting so far this season, the Orange would be wise to allow that shot rather than a close-range one.

That leaves one option for Villanova to attack the zone: avoid it.

Pushing the pace and forcing turnovers on defense might allow the Wildcats to score in transition before the Syracuse defenders are able to get set into their zone. That challenge will be a difficult one since Syracuse turns the ball over just 11.5 times per game and Villanova hasn't been very good at generating turnovers this season. Nonetheless, it may be the best option.

You don't need turnovers to score in transition (but they help), of course. Playing at a fast pace can result in the same effect, allowing the offense to operate and create lanes and scoring opportunities.

This is likely the toughest game Villanova will play all season and despite a home court advantage and some momentum coming off of Sunday's win over DePaul, they are not expected to earn much more than a moral victory in South Philly. Villanova is still finding its identity as an offensive and defensive team, and will continue to work toward that end.

The game will tip off at 7:00pm from the Wells Fargo Center in Philadelphia and will be broadcast live on ESPN2 as well as on ESPN3.com.