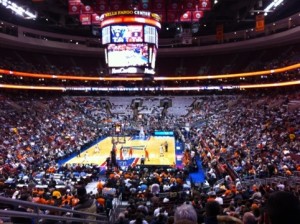 The Cats played in front of a paltry home crowd, with an large portion of the seats being filled by people Cheering for the Orange. Villanova was cold shooting tonight and couldnt hold off the Syracuse attack, falling 79-66.

Nova was competitive at times in the contest and the first five minutes were close in score. Villanova got lost for much of the rest of the first half, allowing Syracuse to pull away, however, leaving Nova with a 19-point deficit at halftime. Despite out-scoring their opponent after the break, Villanova couldnt do enough to chip away at the Syracuse buffer.

"The second half they started to trap and we didn't handle the ball well and attack the defense very well," Syracuse coach Jim Boeheim told reporters. "Our defense slipped a little bit as well. We played so well the first half that we had enough margin for error."

The 'Cats played their best offensively in transition, but did have a few promising possessions in the half-court set as well. Being out-rebounded, even slightly, meant that the misses and miscues of the Wildcats were particularly painful — and there were a lot of misses and miscues.

Though the team shot just 32.8% from the floor, three Wildcats scored 12 points to lead the way, Dominic Cheek, Mouphtaou Yarou and JayVaughn Pinkston. Yarou also grabbed 12 rebounds to record his sixth double-double of the season. Syracuse had just two players scoring in double digits, Dion Waiters with 20, and James Southerland with 13.

Maalik Wayns was 0-7 from the field and scored just 3 points in the game. He had been Novas leading scorer going into the game, with an average of 17.4 points per game.

"They loaded two guys to Maalik [Wayns] every time and extended on him," head coach Jay Wright said after the game. "I thought they did a good job on Dominic [Cheek]. Dominic adjusted and tried to drive the ball. He is our best free throw shooter."

Cheek was 3-of-7 from the charity stripe against Syracuse.

Syracuses leading scorer, Kris Joseph, had just 8 points -- 4 of them on free throws. Starting center Fab Melo picked up three fouls quick in the first half and played just 21 minutes.

Both teams turned the ball over 14 times.

"Ty Johnson really struggled tonight," Wright observed. "We have all seen a lot of really good and experienced guards struggle with that zone. That's what I wanted to talk to Ty [Johnson] about. A lot of great guards have struggled in that zone and it is a great experience to go against it. I hope he learns a lot from it."

Villanova held the Orange to just 27% shooting from beyond the arc while shooting 30% themselves. James Bell connected on 3 of his 5 attempts and Ty Johnson sank both of his attempts from deep. Dominic Cheek struggled, however, making just 1 shot out of 7 from beyond the arc and all other players recorded an "o-for."

"They are always smacking the ball and are in the passing lanes," Wright said about Syracuse's version of the 2-3 zone. "If you don't do that every day you then you don't have the same instincts they have. They have great instincts in that zone, they really do. They are very well prepared personnel wise. They made adjustments based on their shots in the second half. It is almost impossible to see.

"I think good shooters have to learn how to go against defenses that are geared to stop that. They were always secondary guys that played off of Fisher and Stokes."