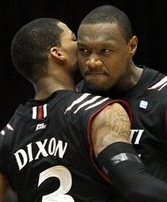 This year the Big East will be an uphill battle for the Wildcats, who have yet to learn the finer points of winning basketball games. Now they will travel to Cincinnati, where the 13-4 Bearcats await them this weekend. Cincy is coming off of a big win in Washington D.C. over a Georgetown team that has looked strong in its own right this season.

Villanova is hoping to bounce back from a loss to number-1 ranked Syracuse in a "home" game that looked and sounded like it was at the Carrier Dome -- a loss that dropped their record below .500.

As a team, Cincinnati shoots 36.4% from the three-point arc. and has nine players who have connected on one-third or more of their shots. That makes them a serious threat to a Villanova defense that has struggled at times controlling the perimeter (though the Syracuse offense was held about 10-percentage points below its season-average from 3 on Wednesday).

Yancy Gates might be the biggest name on the Cincinnati roster, but their leading scorer this season has been sophomore guard Sean Kilpatrick, who has averaged 16.4 points, 4.9 rebounds and 1.6 assists per game. Kilpatrick is just one piece of a talented Cincy backcourt.

Joining Kilpatrick are Cashmere Wright, a junior point guard who averages 10.2 points and 4.8 assists, and Dion Dixon, a senior who contributes 13.6 points. 3.9 rebounds and 2 assists per game. The other starter against Georgetown was junior guard Jaquon Parker, who averages 9.5 points and is the team's best 3-point threat at 58.3%.

The Bearcats switched to a four-guard system after a brawl with players from Xavier during the non-conference schedule lead to six-game suspensions for Yancy Gates and Cheikh Mbodj. Both were relegated to coming off of the bench for a period after their suspensions ended, but Gates appears to be back in the starting lineup now.

Freshman guard Ge’Lawn Guyn will not be available for the Bearcats on Saturday after suffering a head injury against Georgetown.

The Cincinnati defense is ranked 40th in the nation while their offense is rated 70th -- both notably higher than the Wildcats' rating.

The Bearcats left the fans at Casual Hoya sounding very much like VUhoops commenters this week:

Can we guard the perimeter? Can JT3 adjust? Will he stop playing favorites? Will we have poise at the end of games? Can we inbound the freaking basketball?

Villanova is just 1-7 in away and neutral-site games this season, and a win on the road in Big East play would be a huge boost for the Wildcats. To pull it off, however, will be no easy task.

Villanova will need to start strong and go into the half without an insurmountable deficit like they had to contend with on Wednesday night. Even outscoring the Orange in the second half couldn't truly bring the 'Cats back into contention when they had almost 20 points to cover.

They will also need to get more offensive production from Maalik Wayns, who scored just 3 points in the last game. Wayns was moved off the ball recently to allow him to simplify his game and concentrate more on scoring points. That move is a fruitless one if he is not productive on the box score.

Nova will also need to work very hard on defense and cover the perimeter at least as well as they did on Wednesday night. If they can hold Cincy below 30% shooting from deep as well, then the score might be held close enough to give the Wildcats a chance. Good defense can help drive the offense as well.

Villanova needs to get the young players more involved. Starting Markus Kennedy and Ty Johnson is a good start, but players like JayVaughn Pinkston have played well in recent games as well. Pinkston's minutes remain limited despite this, and that should be a matter of concern for Wildcat fans.

Mouphtaou Yarou will be another factor in this game. Going up against the talented Yancy Gates, Yarou is in danger of wearing down by the second half. Nova will need to switch him off with Markus Kennedy on the Cincy bigs to try and keep each player fresh.

Georgetown suffered in part because they turned the ball over 17 times to Cincy. Villanova averages about 13 turnovers per game and will need to do a better job of protecting the ball against a team that is more than capable of burning its opponents on turnovers.

Can Villanova win this game or have they reached a point where moral victories are good enough? Moral victories are never going to be enough for the Wildcat faithful, but some progress in a loss would at least provide hope for the future.

The game will tip-off at Noon on Saturday from Cincinnati and will be carried nationally on ESPN3.com or on Big East regional TV partners like WPHL-17. Check your local listings.