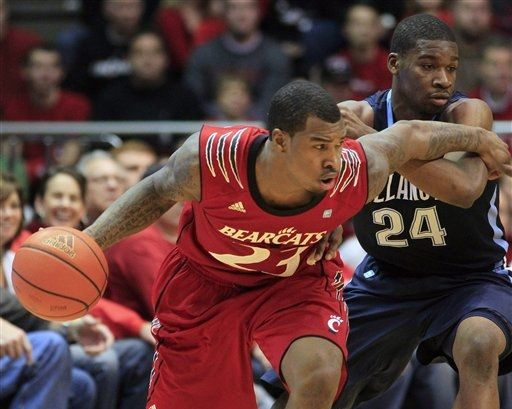 Villanova took a 5-point lead into the half as both teams connected for a big number from deep. Those easy threes dried up in the second half however, and the Wildcats ran out of time, losing the game, 78 to 82. Not even a huge game from Maalik Wayns could save the Wildcats, with the guard scoring 39 points, 13 rebounds, 6 assists and one massive dunk.

Wayns was 37-points short of 1,000 for his career at Villanova entering the game. He has now become the 55th player in school history to reach that milestone after setting a new career high today. His previous high was a 29-point performance against St. Louis earlier in the season. It was the most points scored by a Villanova player since Scottie Reynolds scored 40 against Seton Hall in the 2008-09 season.

In the second half, the 3-point show slowed down, with Cheek making just 1-of-5, and the team's percentage dropping to just 40% for the game. Cincy slowed down a bit as well, dropping to 45% from the arc for the game. With the deep shots not falling like they did in the first half, both teams turned to the dribble-drive to score.

For Villanova, that meant that the offense was firmly on the back of Maalik Wayns, who scored 20 of his 39 points after the intermission. Dominic Cheek scored just 3 points in the second half, for a second-best of 19-points. No other Villanova player scored in double-digits, though Mouphtaou Yarou came close with 9 points on 3-of-5 shooting.

It was remarkable that the game was as close as it was with Villanova turning the ball over 16 times to just 3 from the Bearcats.

The Bearcats had four players score in double-digits, including a team-high of 22 points from Dion Dixon, who hit 4 triples in the game — all in the first half. He was joined by Yancy Gates with 16 points and 9 rebounds, Sean Kilpatrick with 14 points, and point guard Cashmere Wright with 11 points.

Guards Wright and Jaquon Parker finished the game with 4 fouls each while big man Gates fouled out of the contest near the end of regulation.

The Villanova defense didn't perform particularly well all game, allowing the Bearcats to score significantly more points per possession than their season average coming into the game, though that defense did perform slightly better in the second half. Villanova's offense was not nearly as potent in the second half as it was before the break however, scoring just 0.78 points per possession after the break after going off for 1.43 in the first half.

Villanova now drops to 8-10 overall and 1-5 in conference play. Next, they will host Seton Hall at the Pavilion on Wednesday.