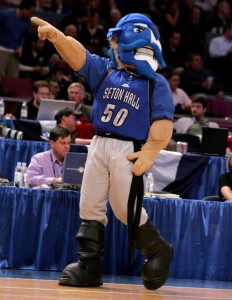 Seton Hall has played against Villanova 100 times, more than any other opponent. The Wildcats lead the all-time series 63-37 and have won the last nine contests. The last time the Pirates won at Villanova was February 26, 1994. If the Pirates have a chance to break that tough-luck streak, this season might be their best chance.

Seton Hall was ranked in the Associated Press poll in week 10, losing that distinction after a disappointing loss in Tampa to the USF Bulls. Prior to that, they won 4 straight Big East games, including wins over West Virginia and a then-#8-ranked UConn Huskies.

Coach Kevin Willard's program has seen its turnaround driven by players like Jordan Theodore, who is perhaps the biggest snubs left off of the 2012 Bob Cousy Award watch list, and a newfound dedication to defense.

Edwin's rebounding is impressive, but it is dwarfed by the efforts of Pope on the glass. The star big man averages a double-double, pulling down 10.6 rebounds.

Though the Pirates no longer have Jeremy Hazell to generate an abundance of offense, they are clearly not slouches. Their offense has shown an ability to score baskets, though they have ranked middle-of-the-pack in the Big East conference in efficiency during conference play so far.

Their defense, meanwhile, is rated 25th in the nation and has been 2nd in conference play, continuing the pattern of improvement in that category under Willard. Opponents shooting percentages from both 2-points and 3-points have been held low enough to rank 4th in the conference defensively.

Villanova played a close game against Cincinnati on Saturday, but didn't play tight enough defense in either half to build a lasting lead. The Bearcats, meanwhile, locked down on the Villanova offense in the second half.

Against Seton Hall, expect that the Pirates will put forth a similar offensive effort, meaning that the Villanova offense will need to find a strategy that will work against Willard's aggressive defense. Having a 62% 3-point barrage in the first half isn't a lasting strategy to that effect, and the Wildcats are still learning how to score without those bombs falling in (except, arguably, Maalik Wayns, who seemed to do just fine on Saturday).

Villanova will also need to find solutions for the Seton Hall attack. Yarou and Kennedy will likely be needed to cover Pope, while Ty Johnson seems likely to be assigned to cover Theodore. If Johnson is off the court, that duty will fall to Maalik Wayns by default, and he will have to hustle to control t the talented point guard.

If psychology matters at all, this would be a good game to give James Bell a chance at some big minutes. Last season Bell had his biggest game against the Pirates in Newark, scoring 21 points on 66% shooting from beyond the arc. Giving him another opportunity against the same opponent might give him some flashbacks to that moment and help him build some confidence in himself as a scorer and a shooter — he remains the only Villanova player connecting on more than one third of his 3-point attempts this season.

Based on results so far, Villanova won't be the favorite very often the rest of the way. Ken Pomeroy projects that a Seton Hall win in this match-up is 55% likely, and if the home crowd is as weak as it was a week prior against Syracuse, the 'Cats will have one less advantage going for them.

The game will tip-off at 7:00pm from the Pavilion at Villanova and will be broadcast live nationally on ESPNU.

Both universities will be playing to support the Catholic Relief Services' (CRS) efforts in Sudan on Wednesday in the "Playing for Peace" initiative. The initiative is using college athletics to "shine a light on the Sudanese people who remain at risk of violence, hunger, displacement and human suffering."

As part of this initiative, CRS will provide the coaching staff of both teams with special Playing for Peace ribbons to wear during the game. Villanova and Seton Hall have also designed shooting shirts for players to wear during pre-game warm-ups and halftime. Additionally, CRS student ambassadors will greet fans as they enter the arena to distribute half-page fact sheets with information about "Playing for Peace," and instructions for an important legislative ask. A halftime ceremony featuring remarks from the Rev. Peter M. Donohue, OSA, PhD, Villanova University President, will further shine a light on the importance of "Staying with Sudan."

Villanova alumnus and Sudanese "Lost Boy" Malual Deng-Duot `11, as well as other Lost Boys living locally in Philadelphia, will be in attendance for the event.

Read more about the initiative and how the game and the two universities will be involved at Villanova.com.