Poll: What can Villanova accomplish?

Share All sharing options for: Poll: What can Villanova accomplish? 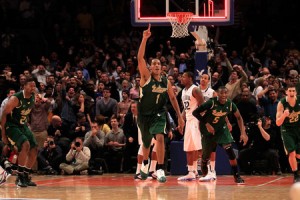 Villanova isn't mathematically eliminated just yet. With 12 games remaining and the Big East tournament, they could theoretically still win 18-20 games -- all quality wins -- and turn things around to go to the post-season. The likelihood of that happening, however, is not very strong.

Villanova is unlikely to go on a 12-game tear based on results so far. Such a recovery would require a dramatic and sudden improvement in defensive and offensive strategy, a series of hot-streaks by one or more players and a fair amount of good fortune. Like an 8-0 game in the bottom of the 9th inning, you have to play it out because the comeback could happen, but most fans still head to the parking lot.

So too have some Villanova fans headed to their cars on this season, and while the student section might chant, "real fans stay 'till the end," those fans aren't wrong. The odds are against the Wildcats at this point.

That doesn't mean that there is no purpose to the remainder of this season, or that fans shouldn't pay attention to see any improvement (or lack thereof) that may develop over the next 13 games. In fact, with so many games left, it isn't unthinkable that the Wildcats could improve enough to get back to a .500 record.

Though currently not in the picture, a few quality wins could land a .500 Villanova team a berth in the NIT or perhaps the CBI.

Maybe gradual improvement over the next 12 games could help the Wildcats prepare to make a season-saving run in the Big East tournament like Gerry McNamara and the Syracuse Orange did in 2005-06. That Syracuse team was 7-9 in league play but finished the season with 23-wins, however, showing some strength prior to that noted run, despite their losses.

If Villanova were to pull of a Big East tournament run this season, it would be far more unexpected than what Syracuse accomplished in McNamara's final season.

What are your expectations for the remainder of the season?