Pirates Fail to Plunder the 'Cats

Share All sharing options for: Pirates Fail to Plunder the 'Cats 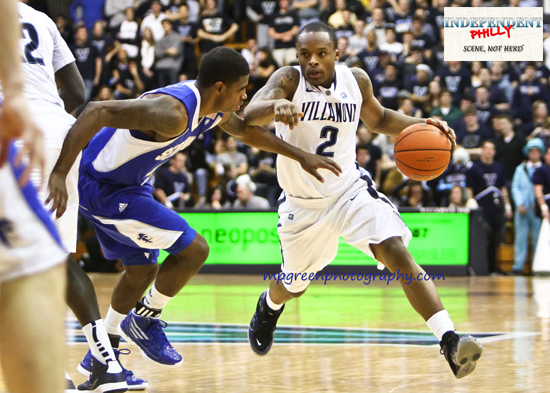 JayVaughn Pinkston set a career high with a double-double of 23 points and 11 rebounds to help lead the Villanova Wildcats to just their second Big East conference win this season. The Wildcats defeated the Seton Hall Pirates, 84 to 76.

James Bell got the start and had another strong game against Seton Hall, which is seemingly becoming a tradition for the Sophomore. He joined Pinkston and Maalik Wayns in double-digits with 18 points on 4-of-8 shooting from beyond the arc as well as contributing 6 boards. Wayns scored a team-high 25 points and dished out 7 assists.

Nova scored 34 of 84 points at the free-throw line, with both Wayns and Pinkston doing considerable damage from the charity stripe. They combined for 33 free-throw attempts and 28 points after drawing fouls. 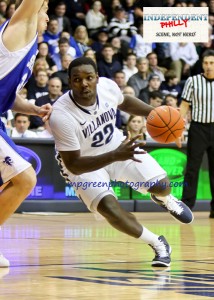 The Villanova defense gave up about a point per possession to the Pirates, but performed well on the perimeter. Seton Hall had been leading the Big East in 3-point percentage coming into the game, but connected on a middling 33% at the Pavilion.

"I feared them making a ton of threes," coach Jay Wright said. "That was something we were really concerned about."

The 'Cats also held Seton Hall's star point guard without a made field goal for much of the game. Jordan Theodore scored 7 of his 13 points at the free throw line with the rest coming on two 3-point shots. He was 2-of-16 from the floor and 2-of-8 from beyond the arc, but Seton Hall coach Kevin Willard thought the referees had more to do with that than the Villanova defense.

"I thought the refs bothered Theodore. He got wrapped up and was getting fouled and it wasn’t getting called," Willard said.

In addition to Theodore, the Pirates had three other players scoring in double digits. Fuquan Edwin led their effort with 14 points, 9 rebounds and 4 steals while Herb Pope contributed 10 points, 8 rebounds and 3 blocks of his own. Reserve forward Brandon Mobley arose from the bench to score 12 points on 4-7 shooting and a perfect 3-3 from deep.

Seton Hall made just 16 trips to the charity stripe in the game with Villanova committing just 15 fouls in the game. The Pirates, meanwhile, racked up 27 fouls and stars like Pope spent much of the game in foul trouble, while Edwin ultimately fouled out.

One of those fouls was a flagrant foul called against Mobley when he pushed a leaping JayVaughn Pinkston to the ground on a rebound. Pinkston looked ready to fight after the foul, but teammate Darrun Hilliard stepped in front of him and calmed him down. Pinkston was awarded two free throws and the ball — he made both of them.

Villanova also connected on just 33.3% of attempts from downtown, but took just 18 shots from that range. Instead, the Wildcats drove to the basket and drew fouls, which proved an efficient means of scoring, with the Wildcats converting 82.9% of those opportunities.

Up next for Villanova is a meeting with the St. John's Red Storm at 1:00pm on Saturday in New York City.