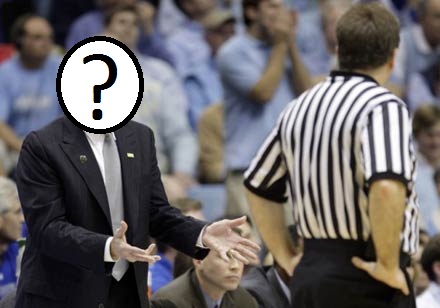 Larry Brown, the former NBA Champion coach has often spotted at Villanova games over the past few years. He is close friends with Jay Wright, and perhaps something of a mentor. While he has no official title or responsibilities with the basketball program, he has been "around."

Brown attends practices, he watches the drills and scrimmages and advises Wright and his staff based on his own expertise from decades of coaching basketball players. It is the second-opinion that Jay Wright looks for to check his own judgment.

When it comes to phone-a-friends, however, Jay Wright has a rolodex deeper than Larry Brown. According to a quote published in the Newark Star-Ledger this morning, there was another coach from outside the program staff who attended practice this week -- called in to provide insights.

"That's what we're looking for -- effort. We have a legendary coach at practice every day, a Hall-of-Famer in Coach (Larry) Brown, but being around so much, sometimes, he's like us. We had a guy on the outside come in and watch practice the other day and after practice he said, 'I really didn't see anybody going after each other.' They're still learning a lot of things and it's hard to play with complete intensity when you're still learning and that's what's going on."
-- JAY WRIGHT

Who was that "guy on the outside?" Was it another Big 5 coach? An ex-Villanova coach? A Philadelphia legend like Herb Magee of Philadelphia University? Or could it have been one of Larry Brown's friends? Either way, Wright hasn't identified this mystery coach.

With the 'Cats bringing in outside coaches to observe practice, it would seem that there was a high level of concern inside the program about the level of play thus far this season. If things had been going well, with a win-count in the teens, would Wright have looked beyond a Hall-of-Fame coach like Larry Brown for advice?

UPDATE (3:40p): We have a clue! According to Dan Gelston of the Associated Press, when asked about the identity of the mystery coach after the post-game press conference concluded, Wright responded: "Can't tell you. He would be embarrassed. He's a local guy."

We can go ahead and eliminate everyone who can't be classified as "a local guy."