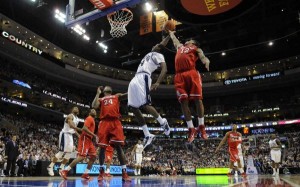 This time last season the country was buzzing about the suddenly resurgent Red Storm, tearing a path to the top of the Big East standings and building a tough home court advantage at Madison Square Garden. This season couldn't be more different; after losing 9 seniors and 3 recruits, the Johnnies are looking tremendously different this year.

Just as Amir Garrett was finally academically-qualified to join the team this spring, the Red Storm point guard, Nurideen Lindsay decided to transfer — currently to Rider University, though he briefly committed to Arkansas. Lindsay had been the team's third-leading scorer with 11.8 points per game as well as the assist leader with 2.9.

In addition to losing players, the Red Storm are also missing their coach. Steve Lavin has been cleared of his prostate cancer, but hasn't been cleared to return to to the bench, yet. He has said that he will return, however, but needs to get his strength back first.

"What helps in dealing with that frustration is knowing that we have a first-rate staff," Lavin told reporters on a Big East conference call. "Being in communication with them and being in concert with them and getting enough time working with the players both individually and then as a group is the only way we can move our team forward at this point. But I'd say it's clearly the most challenging experience of my coaching career."

Through those difficulties, the Johnnies have won 8 games and lost 10, and have a 2-5 record in the Big East. Their conference wins were against Providence and an away game at Cincinnati.

Given the massive turnover, it should be no surprise that 2 of the team's 3 remaining double-digit scorers are freshmen. Swingman Moe Harkless has averaged 15.6 points and 8.4 rebounds per game, while guard D'Angelo Harrison contributes 14.6 points, 4 rebounds, and a team-leading 31.1% 3-point percentage.

Junior forward and all-name team nominee, God'sgift Achiuwa, rounds out the top scorers with 11.6 points and 6.7 rebounds per contest.

The Red Storm have played 7 or fewer players in their last 15 games and have had issues with foul trouble because of it. That lack of depth perhaps has worn the usual players a bit ragged in conference play. They have lost their last three games.

They've struggled both offensively and defensively this season, ranking 186th and 179th respectively in those categories. Opponents have scored easily from both outside and inside the paint. Where the Johnnies have performed well, however, is stealing the basketball, getting blocks and being stingy when it comes to opponents getting to the charity stripe. All of which will give them a chance to knock Villanova out of sync.

Since St. Johns has no really reliable outside shooters, Saturday's game will likely be won at close range. Villanova has succeeded in two games where players drove to the basket more and took fewer long-range jumpshots — against DePaul and Seton Hall. The 'Cats offense will benefit from going again to that strategy in New York.

The Johnnies will allow them some good looks from outside as well, but the sudden emergence of JayVaughn Pinkston necessitates a new strategy. Both Pinkston and Wayns have proven more than capable of drawing contact and scoring at the charity stripe. Until that strategy fails, Villanova should be driving to the basket as a first priority on offense.

Defensively, the 'Cats have looked better in man coverage than they have in their 2-3 zone. There are still excellent perimeter looks to be had for opposing teams regardless of system, but at least against St. John's, there won't be many players skilled enough to take advantage of them.

Villanova will hope to battle with St. John's in New York as well as they battled at home on Wednesday. A victory would be the first for the 'Cats on the road this season, and and important momentum-building going into a difficult stretch of the schedule where they will face #21 Louisville and re-match against #22 Marquette.

The game will tip-off at 1:00pm from Madison Square Garden in New York City and will be broadcast nationally on ESPNU.

Five Questions with Rumble In the Garden

When Pico from the St. John's blog, Rumble In the Garden, asked us to trade questions with him about the game, I dreamed some up to pass along. You can read my responses to his questions over on his site and you can read his responses to my questions right here.

1) How much of a surprise were the losses from the recruiting class this year and the strangely-timed decision by Nurideen Lindsay to transfer?

Well... the thing is, it was evident by the beginning of last season that Lavin was targeting a lot of players - as required by the previous staff's compilation of 2011 graduates - and in targeting players, he went after talent potential. One of the things between those players and their potential, of course, were questions about their academics. Pelle and Sampson and Nurideen had rumors about their academics; Sir`Dominic Pointer had some questions too. So seeing most of those guys go was a surprise but not completely unexpected. Amir Garrett's academic status was a surprise.
Lindsey's transfer was a surprise as well - he's already 21 (and a transfer seems to make no sense if he wants to get to the NBA. Coupled with the reasons he left - not enjoying being asked to play in a different manner - yeah, it's surprising. Any coach would tell him that he needs to learn how to be a point guard, how to not just drive into the teeth of defenses...

2) How much of St. John's struggles come from replacing 9 seniors and how much can be attributed to Steve Lavin's absence?

I think talent does a lot of the winning on this level of college basketball. And having a team entirely of newcomers (and a low-impact junior) is a problem in all facets of the game. Lavin's absence hurts, but the team isn't wildly affected by it - Lavin's not worth 20 points per game or 10-20 better possessions. The young'ins have to learn, and only having seven players means that the energy is always a factor. And the kind of players they have is an issue. The style of play they want - pressing and trapping - needs a few more players, and at least one good rebounder, if not a few great rebounders.

3) Villanova's defense has tended to give up a career game to at least one opposing player per game, who will it be for St. John's?

D`Angelo Harrison can take his opportunities and, when he has confidence, put up points. He's due for a good game. Thanks for making me a little more excited about St. John's chances!!

4) Statistically St. John's has been pretty bad on both defense and offense this season, which are you more concerned about and why?

Offense. The defense is a mix of not having enough bodies, slower rotations, and a need for more strength - and a rebounder.
The offense... needs a lot of help. And more transition chances. And for players to finish their transition chances. There is one player who can create a shot. The team's point guard play is handled by two guards learning the position. There are few players who can/ should use up more possessions (breakout candidates), and no one on the roster is a reliable three-point shooter. A number of guys need to develop both their consistency and their skills in the offseason. I can see the defense becoming more ferocious, forcing more turnovers.

5) Can St. John's get back to the NCAA tournament next season? Can fresh blood like Amir Garrett help salvage some of this season?

I think the NIT is more likely in their second season, dependent on the freshmen they can bring in and how they play. The rebounding is simply, truly awful, and needs a hand or three. Incoming transfer Jamal Branch will help with the offensive cohesion at midseason. I can see a few players becoming better shooters.
Amir Garrett won't be a salve on this season; he's a good player, will be nice on defense, but not enough to carry the team. A team-wide improvement is necessary.