The New Linebacker U

Share All sharing options for: The New Linebacker U 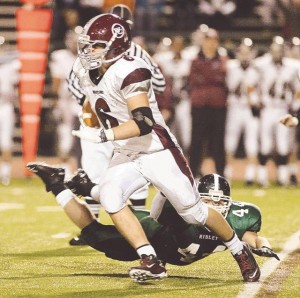 He is 6-2, 220-pounds and excelled at playing linebacker and tight end in high school. He would even line up at wide receiver from time to time. Rated at 2-stars by both Rivals and Scout, putting him just behind fellow Class of 2012 linebackers Corey Majors and Austin Calitro in the hype department.

As a senior he recorded 118 tackles (10.7 tackles per game), two forced fumbles, one fumble recover, five pass break-ups, one interception return for a touchdown, one blocked punt, and one sack. He ran a 4.78 second 40-yard dash prior to his senior season in high school and was also a 3-year starter on the varsity basketball team.

White's father played football at Villanova as well, in the 1980's, after Andy Talley rebooted the program in I-AA. His father played defensive tackle and was named a co-captain of the team by his senior year.

This is the 12th known member for Andy Talley’s recruiting class. Villanova’s other 2012 commitments are:

Since Mark Reardon left his position as defensive coordinator at the beginning of December, followed by defensive line coach Dave Sollazzo shortly afterward, Villanova's defensive coaching staff has been rather shorthanded. With national signing day on the horizon (February 1), completing the football staff was an imminent need, yet more than half-way through the month of January there have been no announcements.

That should change soon. Coach Andy Talley has completed the interview and selection process to add two new members to his coaching staff. The identities of the new hires is not yet known, but an announcement is likely within the next week. The university just needs to finish processing paperwork and completing background checks.

As for the rumor that current linebackers coach and special teams coordinator Billy Crocker would move into the defensive coordinator spot: We haven't been able to confirm it, but Crocker was definitely candidate for the position that Talley was considering. Don't count out that possibility, but nothing will be made official until the two new hires are announced.