Share All sharing options for: A Finger Lickin' Preview 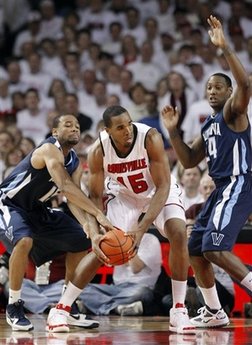 With the odds again stacked against them, the Wildcats will travel to the KFC Yum! Center in search of their second road victory of the season. Louisville, like Villanova, has just three conference victories so far this season, beating struggling St. John's, DePaul and Pittsburgh since conference play started.

They had won 12 straight to open the season.

The Cardinals had dealt with some injury trouble this season. Kyle Kuric had been out with a left ankle sprain, but returned at the weekend against Pittsburgh to score a season-high 21 points. Kevin Ware, however, was limited with a bruised knee and played just one minute against the Panthers. Junior forward Rakeem Buckles suffered the worst injury of all, tearing his ACL against Marquette earlier in the season.

Louisville is ranked 25th coming into their home game with Villanova, but the Cardinals haven't defeated a good team in conference play and currently sit just a half-game ahead of the Wildcats in the Big East standings. Their best wins came in non-conference play against two good programs from Tennessee, Vanderbilt and Memphis.

Kuric is the scoring leader with 13.4 points per game and contributes 4.9 rebounds per game and 1.6 steals. Russ Smith is second with 12.5 points and 2.7 steals. Center Gorgui Dieng has been close to a double-double, averaging 10.2 points and 9.4 boards for the Cardinals, while Chris Smith has scored 10.1 per game to round out the double-digit scorers.

Point guard Peyton Siva has been an important cog for the Louisville attack, scoring just 7.9 points per game, but dishing out 5.9 assists per contest.

The Cardinals shoot 31.6% from beyond the arc, which is slightly better than the Wildcats' 30.6%. Their offense is ranked just 142nd in the nation in efficiency, scoring just 1.024 points per possession.

Like Pittsburgh, Villanova is a mirror-opposite of the Cardinals. While Louisville has been strong on defense, they have struggled on offense this season. Villanova has been notably weak defensively, but hasn't had as much trouble scoring. That difference left the Cardinals with just a 3-point lead at half-time at Pittsburgh on Saturday, but ended with an 11-point los for the Panthers.

Siva credited his team's ability to keep the rebounding differential close for their win over Pitt (they were beat 12-8 on the offensive glass but had slightly more total rebounds). Villanova has been very good on the boards this season, however, and will try to vacuum up every ball on their trip to Kentucky, which will be key with two teams that are as likely to teach a masonry lesson as play basketball.

Villanova will again rely on Maalik Wayns and JayVaughn Pinkston to create scoring opportunities, drive to the basket, draw fouls and score points. Both players have been performing well doing so in the last few games, and the team has been able to scrap its way to two straight wins.

Drawing fouls has been key to Villanova basketball success under Jay Wright. Not only will it get you to the line, but it causes the opponent to become less physical as the game goes on, creating an advantage.

The Wildcats still need to play tighter defense, however. They held St. John's to under a point per possession for the game, but were weak on defense in the second half, allowing St. John's to take control for a while and ultimately forcing them to win the game in overtime, where some fortuitous free throw shooting aided the 'Cats to a victory.

Neither Villanova nor Louisville has looked great in Big East play this season, but the Cardinals are ranked for a reason. Their defense will be a challenge for the young Wildcats to figure out, and their penchant for stealing the ball could be a threat to a team that has had trouble protecting it.

Villanova will look to build on two consecutive wins, while Louisville looks to use Villanova to generate momentum for a tough road trip to Newark on Saturday.

The game will tip off at 7:00pm on Wednesday, January 25, from the Yum! Center in Louisville, KY. It will be broadcast nationally on ESPN.