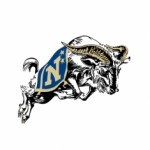 It took them long enough, but the Navy Midshipmen are finally ready to join the Big East — in 2015. CBSsports.com is reporting that the Naval Academy will announce its plans to move to the Big East for football only. It was a move that Navy wanted to make in early December when the conference added Boise State, Houston, SMU, UCF and San Diego State, but their amassed television and scheduling contracts couldn't be reorganized so quickly.

Though the Midshipmen won't join the conference until 2015, as soon as the ink is dry on their agreement to join, the exit fee for football members will increase to $10 million. The current exit fee for Big East members is just $5 million and will remain at that point for any non-football member institution like Villanova, Georgetown or Notre Dame that might choose to withdraw.

Navy had spent more than 130 years as a football independent, but will make the move in light of the changing landscape in college football. They would be the 11th team in the Big East football conference for the 2015 season, meaning that the conference is still one team short of it's short-term goal of 12 members.

Sources told CBS that a 12th football member could be added in time for the 2013 season. It does not appear that Army or Air Force are interested in joining the Midshipmen.

The move has no effect on Big East basketball. The league will consist of 16 members in 2012-13, and from 2014-on, barring any additional new members. In 2013-14, the Big East is currently planning on having up to 19 basketball members, though that number will depend greatly upon the outcome of the Big East's lawsuits with West Virginia.

Longer-term, expansion beyond 12 members in football is still possible, but further expansion also hasn't been approved or decided upon.

"We have talked about the idea of going beyond 12 and creating a model that includes additional members, we haven’t executed that," Commissioner John Marinatto said during a conference call last month. "Our board basically has told us to execute the plan that they approved at our annual meeting on November 1st, and at the appropriate time, whenever that is, we can certainly engage in discussions in regard to expanding beyond that.

"I think once we get our footing established, we can visit the question of expansion beyond that and also revisit the conversation to Villanova’s potential of becoming a football member of the conference as well."

Midshipmen Will Begin Competing In 2015

PROVIDENCE, R.I. – The BIG EAST Conference formally announced the addition of the Naval Academy, one of the nation’s elite and most respected institutions, as a member in the sport of football. The Midshipmen will begin competing in the 2015 season.

The addition of Navy, along with the schools announced in December, will boost the BIG EAST’s television reach to more than 31 million homes. Ten conference members will be located among the top 20 television markets and 16 will be in the top 50.

Navy has played as a football independent since the program began in 1879. The BIG EAST will be Navy’s first conference affiliation. The academy, located in Annapolis, Md., is one of only four schools to produce a U.S. President and a Super Bowl-winning quarterback. Navy has produced two Heisman trophy winners, Joe Bellino and Roger Staubach, and one national championship team.

"When people look back, they will mark this as a truly historic day for the BIG EAST Conference," said Commissioner John Marinatto. "America’s first national football conference is adding a program with true national appeal. Navy’s decision to make the BIG EAST its first football conference home after over 100 years of independence demonstrates the value of our new expansion model and the long-term viability of our football product. The BIG EAST is truly proud to be associated with one of the most prestigious academic institutions in the country and one of the most storied programs in college football."

"The Naval Academy is pleased to accept the invitation for our football team to join The BIG EAST Conference," said Naval Academy Superintendent Vice Admiral Michael Miller, USN. "After careful consideration, we believe this affiliation to be in the best interests of the Naval Academy, our athletic programs and the Brigade of Midshipmen. While our independent status has served Navy football well to date, BIG EAST conference affiliation will help ensure our future scholar-athletes and athletic programs remain competitive at the highest levels for the foreseeable future."

"The BIG EAST will provide an expanded stage for the American public to see our nation’s future leaders," said Naval Academy Director of Athletics Chet Gladchuk. "Expanded media opportunities and coverage by the BIG EAST will elevate the national visibility of Navy football to the highest levels. This new affiliation will brand Navy football as a member of a BCS conference whose competitive aspirations include the opportunity to compete for a championship. The BIG EAST plays a prominent role in the NCAA governance structure and affiliation will ensure that the Naval Academy solidifies its position as an important contributor to leadership decisions on the national level."