Card game was no bluff

Share All sharing options for: Card game was no bluff 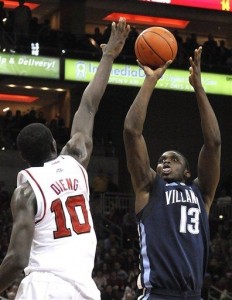 Despite taking a five point lead into halftime, Villanova struggled after the break with Maalik Wayns picking up his third and fourth fouls early in the final half. The deficit became too big to overcome and the 'Cats fell on the road, 74-84 to the Louisville Cardinals.

Villanova started slow, falling behind by as much as 9 points in with 13:40 left in the first half, but climbed back to a 30-30 tie with 5:49 before the half. After a few quick lead changes, Villanova pulled ahead again with about four minutes left on a Tyrone Johnson 3-pointer with four minutes left.

Nova again started slow in the second half, but things really went wrong when Maalik Wayns picked up his third foul about a minute and a half in. Just six seconds later, he was whistled for his fourth foul on an offensive play. He was immediately pulled out of the game and wouldn't re-appear again until there was just 10 minutes left in the game. By that point, the 'Cats already trailed by 10 points.

Wayns' return lead to a small Villanova surge and the 'Cats began to close the gap once again with head coach Jay Wright subbing players in and out at every opportunity for offense/defense.

Along the way, two Louisville players, Russ Smith and Chane Behanan, fouled out. Despite having three players carrying four fouls, none of the Wildcats picked up a 5th.

With about a minute left, however, Jared Swopshire nailed the dagger-3 that put Louisville ahead by 9 points, which would serve an impossible lead to overcome. A Maalik Wayns triple on the next possession brought the 'Cats within 6 points, but they would need to foul in order to buy time — a strategy that ultimately buried them.

The 'Cats struggled to finish offensively after the Wayns 3-pointer while Louisville made six of eight free throws down the stretch to seal the victory.

James Bell had his first career double-double in Villanova's first visit to Louisville's brand-new KFC Yum! Center with 14 points and a team-high 13 rebounds. Bell was 6-of-11 from the field and 1-of-4 from beyond the arc.

Wayns also led the team from beyond the arc with 60% shooting from deep. The team shot just 26.3%, however, with the only other players connecting on a shot from outside being Bell and Johnson (Bell's shot banked in); Dominic Cheek missed all 6 of his attempts. They were just short of 40% from the floor.

Louisville fared slightly better from the field (42.6%) and much better from 3 (34.8%), with five players scoring in double digits. Leading the way for the Cardinals was Peyton Siva, who scored 16 points, had 5 assists and 3 steals. Kyle Kuric scored 14, making 3-of-9 from deep while Chris Smith also scored 14 points on 4-of-9 shooting from downtown. Chane Behanan was an offensive force when he wasn't sitting with foul-trouble, scoring 14 points on easy baskets and center Gorgui Dieng got the better of Yarou, scoring 12 points and grabbing 13 rebounds.

Villanova's defense wasn't able to hold off the Cardinals, who have not be a particularly strong offense this season. Offensively, the Wildcats looked lost and disjointed while Maalik Wayns was out of the game. Both of these are areas in need of continued improvement.

The 'Cats record now falls to 10-11 on the season and 3-6 in the Big East. They will host Marquette at the Wells Fargo Center on Saturday at Noon — their previous meeting with the Golden Eagles resulted in a 4-point loss in Milwaukee.