Share All sharing options for: Recruits Nominated for All-America Honor 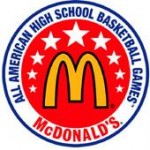 The lengthy list of nominees for selection to this year's McDonalds' All-American game has been released and Villanova's 2012 recruiting class is represented. Both signees, Ryan Arcidiacono and Daniel Ochefu, have made the preliminary list. Top target (though perhaps an unlikely one), Amile Jefferson, is also on the list, as is the former Villanova commit, Savon Goodman.

The nominations are made by High School Coaches, Athletic Directors, Principals, and a McDonald's All American Games Selection Committee, but there is no set maximum for nominees. The list is released after the qualifications of the nominees are verified -- they must be high school seniors in good academic standing with no more than 8 high school semesters.

The Selection Committee will vote three times in order to go from a list of up to 150 candidates, down to 24 players representing the East and West, who will be invited to the game. The final rosters will be named next month during a live selection show on ESPNU.

So, while the entire 2012 Villanova recruiting class has been nominated, it is no sure thing that either player will make the final cut.