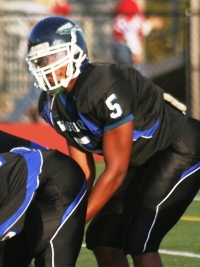 According to Cincinnati.com, Gary Underwood, a quarterback from Winton Woods High School has committed to play football at Villanova -- as a runningback. He rushed for 1,014 yards and 8 touchdowns as a senior this past fall.

He was a playmaker for the Winton Woods team that used him primarily as a running threat from the quarterback position. While he did have opportunities to throw the ball, they were few compared to his rushing attempts. Still, Villanova may consider him an option to take snaps out of the "wildcat" package.

Underwood is the Wildcat's 13th commitment for the 2012 recruiting class. He visited campus earlier in January.

He does not have a recruiting profile on Rivals, Scout or ESPN.

National Signing Day for football recruits is less than a week away on Wednesday, February 1. Players may receive offers and change their minds at any point prior to signing a national letter of intent, so while Villanova appears to have a hold on Underwood and the other 12 verbal commitments, the picture could change over the next few days.

The other known members of the 2012 Villanova Football recruiting class are: