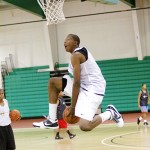 Five-star 2013 small forward Troy Williams, has apparently cut his list of schools down to four. According to his uncle, AAU coaching legend Boo Williams, he has narrowed his list down to Kentucky, UNC, Georgetown and Villanova -- cutting Virginia Tech.

Williams has visited Kentucky and UNC more than once already and has also visited Georgetown, where his aunt, Terri Williams-Flournoy, is the women's basketball coach.

"But we haven't been to Nova," Boo told Five-Star Basketball.

Without any visits, Nova would appear to be in the back of that group of four schools, but the coaching staff must be saying the right things in the meantime to keep the Wildcats in contention. Villanova has a few more months to get him on campus.

"I think he probably will get it done in the next six months," Boo Williams told Five Star.