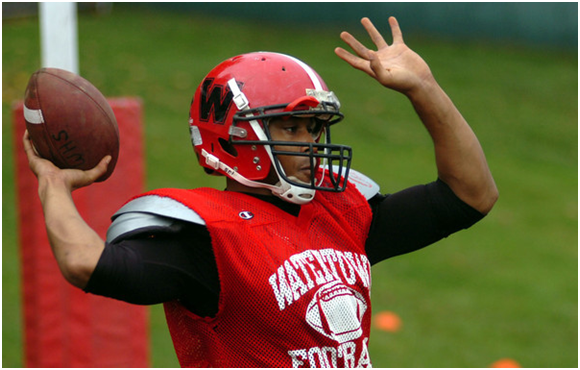 New Villanova defensive coordinator Billy Crocker (who recruits New England) has done well on the recruiting trail this year, adding Massachusetts-bred quarterback, C.J. Logan to the Wildcats' 2012 recruiting haul. News of the commitment was broken by Logan's former coach at Watertown, John Cacace, to the Boston Herald. Logan last played for Watertown in 2010 and is spending this academic year at Northfield Mount Hermon, a prep school in Gill, MA.

The standout at Watertown made a splash in the 2010 season, throwing 15 touchdowns and rushing for 11. He is a dual-threat who will fit well into the Villanova offense. He brings, speed, elusiveness and a hard-nosed willingness to make contact and take hits that may remind Villanovans of Chris Whitney.

Though he played out his high school career in Massachusetts, Logan hails from Bay Minette, Alabama, a small town near Mobile. His biological parents sent him to live with his legal guardians in New England because they felt that it would give him an opportunity to better himself. Now, he will head to Villanova University in the fall and hopefully earn a degree.

"My grandfather taught me the game, and I actually played running back and linebacker in Alabama," Logan told the Watertown TAB & Press in 2009. "I didn’t start playing quarterback until seventh grade, but I always wanted to be one because my father played that position."

A year ago he had verbally committed to play at Bentley University, but his year in prep school seemed to change his mind. There was a chance that the coaches at Bentley would have asked him to change positions -- a move he would have accepted -- and that may ultimately be the case at Villanova as well.

Bentley's strong business program was what attracted him to that school a year ago, and the Villanova School of Business' reputation was likely a draw for him this time around as well. His dream career when his playing days are over is to become a sports agent or to work in marketing for a professional team.

Logan becomes the 14th known recruit for the Villanova football class. The other known members of the 2012 recruiting class are: