Eagles Golden in the Second Half

Share All sharing options for: Eagles Golden in the Second Half 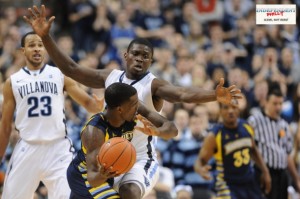 Villanova's trend of playing close games again Marquette continued with another 4-point difference. The referees whistles got as much wear and tear this afternoon as they had all season, as the Wildcats fell to Marquette, 78-82 at the Wells Fargo Center. The late-arriving crowd was treated to a slow-paced free-throw shooting showcase that started at the end of the first half and continued through the rest of the game.

"There was just a parade going to the free-throw line," Marquette coach Buzz Williams told reporters. "It had to be the longest game in the Big East this year, time-wise, we had to hurry up and pray because the plane is going to leave us."

Villanova started strong, getting out to a 9-2 lead quickly on the strength of some 3-point shooting success. James Bell opened the scoring from deep and soon after hit another one, back-to-back with Maalik Wayns. Nova’s lead fluxuated, going as high as 18-points and some hot 3-point shooting by Jae Crowder brought the lead down to 8-points with 3 minutes left in the half.

Villanova extended its lead back out to 10-points over the last three minutes and took a 46-36 lead into the break. Dominic Cheek and James Bell each had 11 points at the half and the Wildcats lead the Golden Eagles 25-17 on the glass, including a 9-6 edge on the offensive glass.

Both head coaches were hit with technical fouls. Jay Wright was T’ed up earlier in the first half when loudly arguing a blocking foul called against Maalik Wayns. The referees returned the favor with 6 and a half minutes left in the first when Marquette head coach Buzz Williams fell to the floor after a foul sent Dominic Cheek to the line.

"I want to be the right example for Marquette," Williams said with his voice strained from yelling during the game. "I think when you get a technical it makes it about you. I’ve had two technicals in the last three years, and both were called by the same guy, so yeah, I continued to harp on it, because that’s not who I am. I don’t believe in it.

Villanova ultimately fell prey to the Marquette press. The second half opened with a 5-0 Marquette run highlighted by a Vander Blue alley-oop from Darrius Johnson-Odom. Mouph Yarou was whistled for his third foul and forced to the bench during the stretch.Villanova was forced to call a timeout to get the defense settled before two minutes had ticked off the clock. 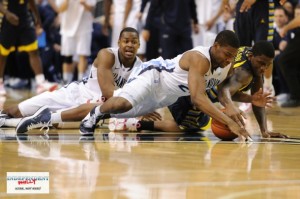 Yarou and Markus Kennedy were whistled for their fourth fouls early in the second half, forcing Maurice Sutton into a bigger role for the final 17 minutes.

"[Yarou] had sat so much, he had two fouls in the first half . . . It just got to the point where, this kind of rebounding in this game is about quickness to the ball and we needed to be quicker out there," Jay Wright explained. "That was a decision I was struggling with, do we go quick and small or try to stay big?

"Mouph and Kennedy both had two fouls quickly in the first half and then in the second half they both had four immediately. Mo Sutton is more of a quickness guy, so we just had to go small and try to match them, but they’re better at small ball than we are."

Villanova's rebounding advantage disappeared after the break. Despite leading in offensive boards and overall in the first half, they finished the game trailing the Golden Eagles on the offensive glass 17-13 and overall 44-39.

Jae Crowder stayed hot in the second half, scoring 13 points, including a falling-down three to tie things up just before the 12-minute mark. Shortly afterward, Kennedy picked up his 5th foul for Villanova and was out of the game. Marquette took their first lead of the game, 55-57, with 11:39 left.

Coming out of the timeout, Dominic Cheek connected on a 3-pointer for Villanova’s first points in over 4 minutes, retaking the lead. On the subsequent possession, Villanova scored a bucket and a foul to make it 61-57, before another foul was called against Pinkston to give the Eagles another opportunity from the free-throw line.

Cheek was 2 of 8 from deep for the game and the Wildcats shot just 23.1% from beyond the arc in the second half.

"3-point shooting is a big part of this game," Wright asserted. "Making them is important, but the second-most important thing is the threat that you could be making them. If you just don’t take them, then they’re not going to play you at all. So you have to have a balance, even if you’re not shooting them well.

"It’s a balance. I’ve heard people say, "you’re shooting this from 3, why don’t you stop shooting 3s?" That’s the worst thing you can do, because the other teams are smart, if they know you’re not taking 3’s, you’re not going to be able to do anything."

The coaches weren’t the only ones who were called for technical fouls. Wayns was whistled for one himself around the 6 minute mark when he uttered a four letter word beginning with "s" (a word that wouldn’t garner more than a PG-13 rating) toward a referee after he missed a call on an out-of-bounds. MU converted to make the score 69-67 in favor of Villanova. The they scored again off the inbound to make it a 71-69 Marquette lead with 5:41 to play.

Marquette’s Davonte Gardner fell hard on a blocked shot by Bell in the final minute and Villanova was given two chances to score 5-on-4, but missed a shot and turned the ball over. The officials didn’t stop play until 47.0 seconds were left in the game, and coaches were finally able to help Gardner off the court. Villanova trailed 73-76.

Nova was able to get the ball back with 45 seconds on the clock on a Marquette turnover, but Dominic Cheek’s shot on the other end was short and the ‘Cats were forced to foul. Marquette went up 78-73 after the foul shots.

Sutton game back and scored on the next Villanova possession, but with the shot-clock turned off, Villanova was forced to send the Eagles to the line again to stop the clock. They again made both shots for an 80-75 lead.

A Pinkston 3-pointer closed the gap to 2 points, but in an effort to stop the clock again with just 8 seconds left, Maalik Wayns picked up his fifth and final foul. After the Golden Eagles made both free throws, the Wildcats wouldn’t recover.

"I thought we did a good job in the first half creating some offense off our defense and then in the second half we just couldn’t get stops," Wright noted. "That’s the really best way for us to create offense.

"We couldn't get the stop to get out and get the easy baskets, and we got locked into a half-court game."

Five Wildcats scored in double digits, with Pinkston leading the way with 17 points and Dominic Cheek not far behind with 16 — both had 5 rebounds. Maalik Wayns scored 12 points and had 4 assists in just 28 minutes, while James Bell scored 13 points, had 4 rebounds, 2 assists and a blocked shot.

The biggest surprise was Sutton, however, coming in as a reserve because of Yarou and Kennedy's foul trouble. Sutton recorded a double-double, with 11 points and 10 rebounds (5 offensive) in just 22 minutes on the court. He also had 2 blocked shots and led the Wildcats with 3 steals.

"He was awesome, he was great," Wright said of the reserve forward. "He played with a lot of energy and that’s something we tell all of our guys — be ready — and I thought he was ready and did a great job."

Villanova committed 20 turnovers, during the game and saw their shooting decline dramatically as the game went along. They fought hard to the end, but weren't able to execute efficiently.

Next up for the Wildcats is a trip to Pittsburgh on February 5th — over a week away. It will be a welcome break after a stretch that had them face the #25 and #18-ranked programs over the last four days.