How Good is Mo Sutton?

Share All sharing options for: How Good is Mo Sutton? 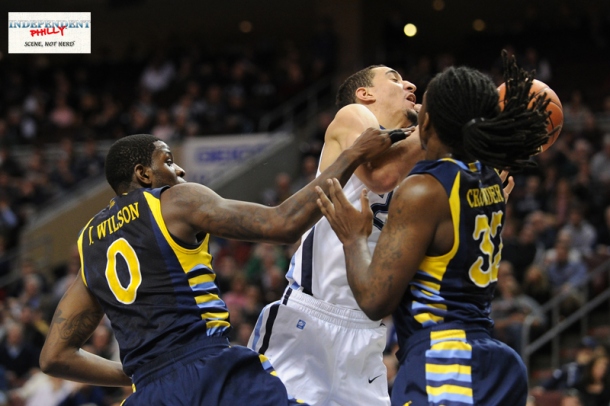 On Saturday, Villanova couldn't keep it's hyped starting center on the court. Mouphtaou Yarou played just 11 minutes against Marquette while picking up a number of quick fouls. His big-bodied understudy, Markus Kennedy, didn't fare much better — he fouled out of the game with 13 minutes remaining. All of that meant one thing: more minutes for Maurice Sutton.

Sutton played 22 minutes in that game, scoring 11 points, grabbing 10 rebounds, 3 steals and 2 blocks. Half of his rebounds were on the offensive glass.

Sutton is the rare player who redshirted for a season without necessarily suffering any injury. That was four years ago, when Sutton was a skinny 6-10, 180lb forward/center who was recruited to Villanova to provide some height and front court depth. Now, Sutton is listed at 220lb, still less than 6-6 James Bell (who admittedly has the assistance of two metal rods to hold him to the ground).

Even before his performance against Marquette, some fans were calling for the senior to get more playing time. Afterward, the clamoring for an increased role has only been louder.

Sutton's stats are hard to truly judge based on the small sample size. He averages just 6.4 minutes per game - which is actually down from the last two seasons where he played over 10 minutes per game. This season, he didn't even get off of the bench in 7 of the Wildcat's games and played one minute or less in 5 more.

Sutton is 7th on the team in points scored per minute played with 0.25 points per minute. Maalik Wayns is the team leader with 0.55 points per minute. When he is on the court, Wayns takes 28% of the team's shots but Sutton has accounted for just 12.1% of the shots taken in his 96 minutes of game time.

In ORtg, a metric that determines a player's offensive efficiency by dividing the points produced by the number of possessions that player has used, Sutton ranks first, producing an ORtg of 115.3. Maalik Wayns has an very strong ORtg of 111.9 — good enough for second place. He also leads in effective field goal percent with 52.9% despite having not even attempted a 3-point shot (James Bell is a close second with 52.8%).

When it comes to rebounding, no Wildcat has been more productive per-minute that Mo Sutton. He produces 0.333 rebounds per minute played, edging out Yarou with 0.312 and Markus Kennedy with 0.310. On the offensive glass he is second, grabbing 0.115 offensive boards per game, with Kennedy leading at 0.129 and Yarou coming in third with 0.111.

The little-used big man crushes his teammates in steals-per-minute, forcing 0.052 while number-2 was Kennedy with 0.037.

He comes in second in blocks per minute and third for (fewest) turnovers-per-minute.

With just 96 minutes under his belt in 2011-12 and more than halfway through the season, however, the validity of all of these numbers is perhaps questionable. Against a ranked opponent on Saturday, however, it certainly seemed as if he was validating those results. Per-minute, Sutton had 0.5 points, 0.455 rebounds, 0.23 offensive rebounds, 0.14 steals, and 0.09 blocks in that game.

Does the skinny big man from Maryland deserve more minutes?

Sutton's per-minute production has been strong in small sample sizes so far this season. He is by-no-means superman, but he hasn't been a liability on the court either. That all could change with a greater role being handed over, but isn't it worth taking that chance?

He certainly has more basketball experience than Yarou and he is more mobile than Kennedy. He is a different type of player than the other Villanova forwards. Sutton isn't as bulky, but he is quicker than Yarou and Kennedy and has good instincts on the court.

Sutton also won the Hoops Mania slam dunk contest — a mostly meaningless affair that he almost won by default as his teammates missed their attempts repeatedly. The meaning inherent in that fact is that Sutton may be the best offensive finisher of the group.

Lets also not forget that despite the fact that his school biography page lists him as a junior, Sutton is in-fact in his fourth year of school at Villanova. Jay Wright talks about senior leadership, but ultimately decreased the minutes of the one actual scholarship player in his fourth year.

We won't know if Maurice Sutton has played his way into a bigger role until the next game against Pittsburgh on Sunday, but the numbers suggest that Jay Wright should consider it.