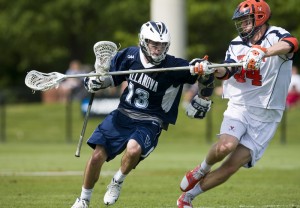 With the spring semester finally underway, the college lacrosse season is fast approaching, and Villanova will enter the season on February 18th, ranked 10th in the nation. Both the USILA Coaches Poll and the Nike/Inside Lacrosse Media Poll, both major national polls, had the Wildcats ranked in that spot when their preseason rankings were released on Monday afternoon.

Reigning national champions Virginia were ranked first in both polls.

Big East rivals Syracuse and Notre Dame were also ranked in the top-10 in both polls while Georgetown also received votes. The Irish were 9th in both, while Syracuse was 7th in the Nike poll and 8th in the Coaches poll.

Villanova will play 10 ranked teams this season, including non-conference opponents Bucknell (Feb. 25 - Home), Drexel (Feb. 28 - Home), Delaware (March 3 - Away), Penn (March 10 - Away), Princeton (March 13 - Home), Maryland (March 17 - Away) and Penn State (March 31 - Away). That schedule includes a brutal stretch from late February until the end of March where every opponent is listed in the preseason rankings.