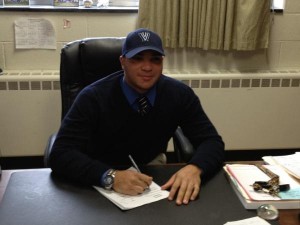 February 1 marks the beginning of the signing period for college football and most, if not all of Villanovas football recruits in the 2012 class signed a national letter of intent today. VUhoops.com had previously reported on 15 members of that class and a total of 17 recruits ultimately signed with one player already enrolled for the spring semester.

*Signing confirmed by Villanova
Already Enrolled for Spring Semester:
Reported as Considering Villanova (Did not sign):

Check out our Signing Day primer for more information.