Share All sharing options for: Football: Jacob Gribb makes it 19 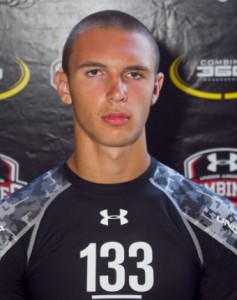 Villanova's coaches looking at an experienced wide receiver corps and a recruiting class with just one player at that position, thought a year or two ahead earlier this week when they offered an off-the-radar wideout from Pottstown, PA. Jacob Gribb weighed his options and ultimately signed with the Wildcats today.

Gribb also played basketball and threw javelin at PJP, but his main sport was always football. As a receiver, he caught 75 passes for 1,257 yards and 11 touchdowns in just two seasons (21 games) at Pope John Paul II High School. He claimed offers from Bucknell, Lehigh and Wagner as well as an appointment to the United States Naval Academy.

He told the Pottstown Mercury:

"(The coaches) told me they are a little thin at the wide-receiver spot," Gribb explained. "Hopefully I can get some quality reps and work myself in somewhere.

"I’m going there as a wide receiver, but they may move me to defense. It depends on how I fill out. I’m not where I want to be yet. I’d like to get up around 225, so I’ll have to work out on my flexibility and speed. Villanova has a great strength and conditioning coach, but I feel I have to get faster more than anything."

Luckily for Coach Mark Ferrante, who recruited Gribb, nobody told him yet that the strength and conditioning coach, Justus Galac, is on his way to Florham Park, New Jersey to work with the New York Jets. The next hire at that spot will surely be able to work with him at achieving his goals, however.

Gribb is used to playing in a spread offense and said that he hopes to work his way into the rotation as a freshman. There may not be very many repetitions available for him next year, however, but as a redshirt freshman in 2013, he may easily get his chance.

Like Mike Burke, who signed yesterday, Gribb is a possession receiver. He clocks in at 6-4 and 200-pounds with a 28.5 inch vertical and a 4.7 second 40-yard dash time.

In addition to athletic success, Gribb is a member of the National Honor Society and an Honors Student at PJP who has a 4.0 GPA, takes AP classes and happens to be ranked 18th in his class. He also volunteers in the community and is an usher at his church. In other words: he is the admissions office's dream athlete.