How good is Maalik Wayns?

Share All sharing options for: How good is Maalik Wayns? 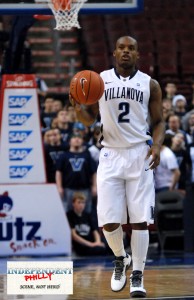 Earlier in the week, we posed the question of how good Maurice Sutton really was for the Wildcats. The recipient of very few minutes this season, Sutton had a career performance on Saturday, as the Wildcats dropped a second game against Marquette by four points. During that game, Darrius Johnson-Odom passed Maalik Wayns to become the Big East's second-leading scorer this season. Wayns now sits 3rd on that list for points per game with West Virginia's Kevin Jones lapping both player to take the top spot.

With 405 points scored this season, however, Wayns still has more total points that Johnson-Odom. In fact, even on a per-game basis, Wayns has scored just 0.1 fewer points.

That 3-point game against Syracuse only muddles the argument even more. Was that game a fluke? Should we ignore it for the sake of comparison? If that game were stricken from the record his per-game average would be 19.14 points, which is comfortably ahead of DJO's 18.5 and still trails Jones with 20.9.

We can't just go around giving players a mulligan though.

Wayns leads the Big East in free-throw percentage, which is important because he does get a significant number of opportunities there. In the bigger picture, however, he could probably score more at the line. Wayns draws fouls at a rate of 5.7 per 40 minutes and has a free-throw rate of 42.9, which is a smidge below the mark of 50 that Ken Pomeroy considers "Good" or 70, where a player becomes "excellent."

Free-Throw rate compares the number of free throws attempted to the number of field goals attempted. The higher the number, the more efficient a player is at scoring (assuming they actually make their free throws). A player like Maalik Wayns who can connect on 89.9% of his free throws, is under-utilizing that skill with such a low free throw rate.

In contrast, Mouph Yarou has a FT Rate of 53.9 and JayVaughn Pinkston is sitting at 71.6.

Wayns has the nation's 359th-best Offensive Rating at 111.9 and takes 28% of the team's shots when he is on the floor. He is rated highest for assist rate, however, coming in at 79th nationally in that category -- 31.2% of his teammates' scoring has resulted from an assist he has dished out while he was on the court. Only two teammates have recorded a double-digit assist rate, Ty Johnson with 22.7% and Markus Kennedy with 10.1%, and neither has received more than a moderate amount of minutes this season.

While these numbers suggest that Wayns has room for improvement, you don't have to look too much deeper to see another issue. Villanova relies on Maalik Wayns to create offense.

Whether that offense comes from Wayns directly or from his teammates, it seems all the more likely to happen when Maalik is on the floor. Wayns can create opportunities for himself (and does so often), but his teammates haven't had such an easy time and rely on the assist to set them up.

To date, Maalik Wayns has been the Wildcats' best assist-man, dishing out 4.6 assists per game. The next-highest number belongs to Johnson, who has produced just a paltry 1.7 assists per game. Part of that deficit can be explained by the minutes differential of course, but Wayns still leads Johnson in assists-per-minute, 0.137 to 0.126.

How good is Maalik Wayns? Without question he is the most important player on this year's Villanova team and when his minutes have been cut, the 'Cats have struggled -- and that includes the times where they have been artificially cut by foul trouble.

In the long-term, Nova needs to find a way to get by without Wayns on the court but in the short-term, they can't live without him.