Football: Matusz in for Galac

Share All sharing options for: Football: Matusz in for Galac 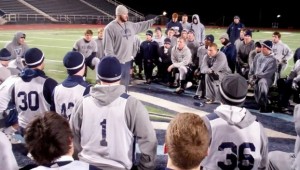 Justus Galac helped the 2009 Villanova Wildcats win a national championship from his office in the weight room, but his successor helped them win it on the field. Phil Matusz was a senior captain who anchored the defensive line on that team, and after graduation joined the Wildcats as an assistant strength and conditioning coach. So when Galac left the program for the bright lights of New York (or, more accurately, Florham Park, New Jersey), the football program didn't have to look very far to fill the job.

"We moved Phil Matusz up," head coach Andy Talley said. "Phil was a captain of our National Championship team, a starting nose guard for four years — so he worked under Justus [Galac] for four years — and then was his assistant strength coach for two, so he knows our system."

Matusz is a 2010 graduate of Villanova and has only been working as a strength coach for the past two seasons. Talley wasn't worried about the length of his resume, however.

"He's a little young for the job, but he actually has more experience than Justus did when he took the job over. I mean, he's got 6 years of indoctrination in Justus Galac's philosophy.

"I replaced Justus with the best guy I think I could have replaced him with."

Matusz is a coach that comes from a similar mold as Galac, both were energetic motivators. Matusz as a player was always up for a game.

"He's passionate, I don't know if you've ever watched him before a game, but he's a wild man. He's very emotional, very upbeat.

"He's matured, I've watched him mature over the years, but he has a long way to go. We're going to live with some of his 'early learning spots,' but he's mostly going to be dealing with players, that's what a strength coach has to deal with — the mood of a particular player at a particular time; you get them at 6 in the morning, they're not exactly all sunshine, and they get moody, and you're dealing with all of the different personalities, which is part of the experience."

It won't be easy stepping into the huge shoes of Justus Galac. Talley thought very highly of the man he helped elevate from a graduate assistant into one of the top strength coaches in the Championship Subdivision — if not all of football.

"He was with our players 24-7, year round, so to replace someone like that, you have to get lucky."

Villanova hopes to be lucky again with Phil Matusz taking the reins for the football program. As an assistant, he had been working with the lacrosse, baseball, volleyball, softball and women’s soccer teams at Villanova. Now he will work with the football players. Different teams have different goals, but in many ways he will be applying the same principals that Galac used to motivate and push his teams to get better.

"We lost a heck of a defensive coordinator in Mark Reardon. That’s a huge loss for us, I mean that guy was tremendous."

"Roc was the defensive coordinator at Eastern Illinois for 10 or 11 years and they’ve had 6 playoff experiences," Talley noted. "

Brian Flinn, our wide receiver coach, coached with Roc at Eastern Illinois, and when our job came open, it was important to me to get a guy with some experience. I wanted to help Billy Crocker with a guy who has been around, and Roc was a guy who was available to us. "

Though he is coming from a midwestern university, Bellantoni isn't a stranger to the northeast.

"He’s from [New York], so he’s an eastern guy and you know I love the fact that he had a coordinatorship under his belt and he’s also going to coach special teams. You know he looked around in the job market and felt that Villanova would be a great place for he and his family — they’re looking forward to coming east.

"Its an easier transition for him than it would seem."

Don't call the move from his previous job as a defensive coordinator a step down, though. Bellantoni is arguably taking on just as important a role at Villanova.

"The luck of the draw had Villanova available, and I think being the special teams coordinator fit for him, even though he was a D-coordinator, at least he’s coordinating. And really, he’s responsible for every kid on our team, because all of our kids, you know, are involved in special teams."

As for Trisciani, he had been on Talley's radar for a while, and apparently for a good reason.

"We’ve been in touch several times before and finally this job opened and he came in and just did a tremendous job. He was phenomenal actually. Secondary-coach wise, technique, he had it down pat, my staff was really impressed with him.

"So we end up getting a tremendous secondary guy with college experience, a former defensive coordinator coaching the d-line and special teams and a guy like Billy Crocker who coached the secondary here, coached the linebackers here and knows the defense."

Despite spending the last five years as the head coach at Whitehall High School, Trisciani has a college coach's resume.

"Tony Trisciani, you know, came in with five years of high school experience as a head coach where Chris Polony played, but previous to that, he really was a college assistant.

"Then he ended up marryng a girl from Allentown and she didn’t want to move because her kids were still growing up. Pete wanted him to go to Ball State with him, but he opted to stay in Allentown and coach Whitehall High School for the last five years or he would have been in the college ranks."

Bill Crocker will oversee the entire defense, moving him from the sideline to the press box. Talley's last two defensive coordinators came in with a similar amount of experience, and he hopes that Crocker can be as successful.

"Billy worked under [Reardon] for 6 years, is a Coast Guard Academy grad, he’s smart, and he knows our system. He’s very motivational and very emotional, so he’s got to find that happy zone where you temper all of that on game day. I think that’s the experience he has to have. He has to be up in the booth, making his defensive calls and analyzing what’s going on, accepting info from the people around him and when the bullets start flying, this is when you earn your keep.

It will still be a challenge to follow up Reardon. Crocker has to live up to that challenge in order to reach the same level — but it's a challenge he is capable of living up to.

"When you lose a top-flight guy, my particular feeling to the guy coming up is that you’ve got big shoes to fill. Its not going to happen overnight. Reardon was an outstanding defensive coordinator, respected nationally.

"We’ve replaced him with a guy who has been around and understands what has to happen and has all of the intelligence, and fire and drive to keep us up there."

Overall, Talley is very positive about the rebuilding of his defensive staff after the defections of Reardon and Dave Sollazzo.

"I think our defense will continue to have a good rep and be a defense that everyone is proud of."