Share All sharing options for: All the way back! Nova wins 74-72 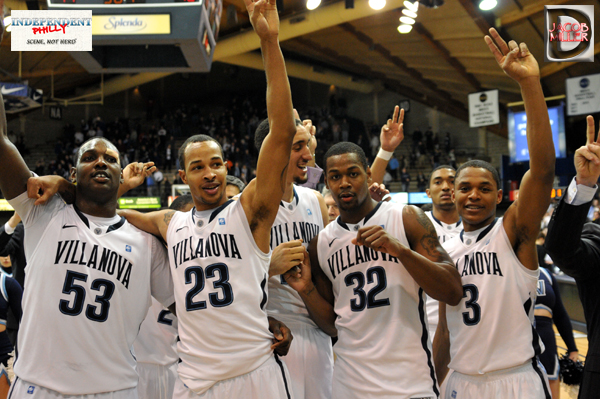 Villanova fell behind by what seemed an impossible-to-overcome 19 points in the second half. It seemed even worse when Maalik Wayns went to the locker room with a left knee injury. Wayns wouldn't return, but the Wildcats would, with JayVaughn Pinkston taking over with 28 points and 14 rebounds to lead the Wildcats all the way back to a 74-72 victory over the last-place Friars.

In the final few possessions, it seemed like Pinkston was everywhere for the 'Cats. He scored the team's last 9 points and had 6 offensive rebounds, including a couple of his own balls, put back for a score. Pinkston also had 2 assists, 2 blocks, a steal and managed to go 34 minutes without turning the ball over. He missed one early free-throw, but connected on the other 8.

"For him to go 8-for-9 from the foul line — and they were all big free throws — just shows you how hard he's worked," coach Jay Wright told reporters after the game. "You know, you just get special kids sometimes. He's so coachable, it's amazing, just whatever you tell him to do, he's just got the greatest attitude."

New student-section favorite Maurice Sutton also played a major role in the comeback. After Nova took the 2-point lead, Providence would have the ball again with 18 seconds on the clock. Coming out of a time-out, Gerard Coleman drove to the rim and was blocked by Sutton, leaving little time to find another shot. Bryce Cotton then missed on a rushed 3-pointer at the buzzer to allow time to expire with Nova ahead.

Cotton had nailed six 3-pointers in the first half, scoring 18 points, but was shut down in after the intermission.

"Cotton, he got hot in the first half, but we just stuck to the game plan," junior guard Dominic Cheek said afterward. "We adjusted more to him, like when the ball got more to his side we denied them a bit more."

"We extended it a little bit," Wright added later. "We were concerned early about extending it too much on those guards because they’re so good off the dribble, and we extended it in the half-court. "

Villanova went into the half trailing by 14 points. Cotton's production from deep being a large part of the reason why. According to Jay Wright, however, the Wildcats had a little help during the break from a friend.

"They said he came in and told them we weren’t playing Villanova basketball."

The 'Cats didn't immediately get back on track in the second half, though, as the deficit increased to 19 points on a LaDontae Henton jumper with 14:05 left in the game. Henton scored 13 points in the game.

Sutton responded shortly afterward with a crowd-pleasing dunk. James Bell assisted the play for one of his 8 assists on the night. Sutton played 14 minutes, and that dunk was his only score of the game. He also contributed two blocks.

Dominic Cheek was 4 of 8 from downtown and his hot streak was key to the 'Cats comeback. With the 'Cats down 61-57 with just over 6 minute left, Cheek nailed a corner-3 on an assist from Ty Johnson.

One possession later, Cheek nailed another triple, this time assisted by James Bell, to tie the score at 63.

Providence then went on another mini-run to take a lead again, getting their lead back to 5 points with 3:14 left on the clock. The Villanova defense then came alive. A quick look at the play-by-play from that point on shows fouls and turnovers from Providence met by Pinkston scoring buckets for Nova.

"When you get down 18- to 20, you know from experience, and players know it from experience, that the only thing you can do is fight to the last second," Wright explained about his team's thought process. "That’s the only way you have a chance. Anything less than that and you’ve got no chance. So there’s a good period of time where you’re just saying like, ‘don’t give in, don’t give in, just play it to the last second.’

Wayns sat out for the bulk of the second half, which meant that instead of dominating the team's minutes as he normally does, Villanova's younger players would have to step up. The team responded well to that situation, however.

"I think it bodes well for our future," Wright claimed. "I’ve been looking for any kind of situation to get Tyrone Johnson some positive minutes. He’s just behind, but we think he’s going to be good. It was great to get him on the floor, I think that’s going to be really good for us, and the other guys get confidence in him."

Vincent Council, who leads the Big East is assists had 7 tonight and scored 17 points for the Friars. It could have been worse, however, and Jay Wright credited two freshmen with shutting down the Friar's top scorers late in the game.

"Ty was guarding him straight up most of the night and even on that big shot he hit at the end, Ty made him pull up."

Wright felt that Johnson was very effective on defense, but also praised the way that his freshman guard ran the offense without Wayns on the floor. Specifically getting the ball inside to Yarou, who scored 17 points and had 8 rebounds, and to Pinkston. 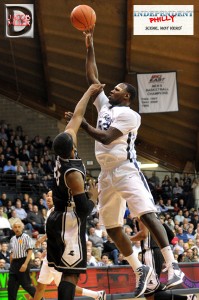 Pinkston, he said, had worked hard to get to where he is and earned his role on the team.

"He works out extra," Wright noted. "Lon Record our strength coach does extra conditioning with him, he comes in and shoots extra, he’s just really a pleasure to coach. Its tough in our society today. Its so simple, if players just listen and do what coaches ask them to do, if they’re talented they’re going to. But it just doesn’t happen that way.

"This kid is, he’s a throwback. I’m so thrilled for him."

Villanova will potentially need Pinkston to continue his strong play if Wayns misses any more time on the court. Wright didn't know the nature of the injury other than to say that it was his left knee and that he 'tweaked' it in the first half. The trainers took a look at it and decided to be cautious, but noted that his ACL was intact. He will undergo an MRI tomorrow.

Nova is now off until February 15th, when they will travel to the Times Forum in Tampa for a re-match with the South Florida Bulls.

VILLANOVA, Pa. – Junior guard Maalik Wayns, whose left knee was injured in last night’s 74-72 victory over Providence, underwent an MRI examination this morning. He will be fully evaluated by Villanova Team Orthopedist Dr. Rob Good of the Main Line Health System on Thursday.

An update on his status is expected after the evaluation tomorrow.