Cooking in the Deep Friar

Share All sharing options for: Cooking in the Deep Friar 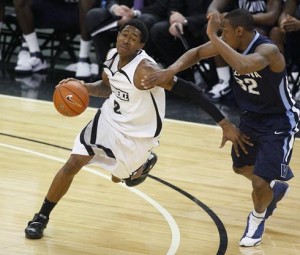 At 2-9, the Providence Friars currently share last place in the Big East with DePaul. Villanova sits just one spot ahead of them at 3-8, and if the Friars leave the Pavilion with a win, it will create a three-way tie at the bottom of the league. The two Friars victories came against a young Rutgers team and a Louisville team that they blew out at the Dunkin Donuts Center.

During the Friars' most recent outing, they took a lead into half-time against West Virginia and played to a draw at the end of regulation. They lost when Darryl Bryant, nailed a 3-pointer with about a second left on the clock, giving the Mountaineers an 87-84 victory.

Vincent Council, a junior guard, has been trying to fill the void left by the graduation of MarShon Brooks on the scoreboard. Council has averaged 16.1 points per game, grabbed 4.3 rebounds and dished out an average of 7.7 assists. He is the offensive driving force behind the Friars attack.

Bryce Cotton, a sophomore guard, is Council's sidekick, scoring 15.3 points per game, 2.8 rebounds and 2.2 assists, while leading the team in 3-point percentage at 41.8%. Two other players have averaged a score in double-digits, sophomore guard Gerard Coleman with 14.2 ppg and freshman forward LaDontae Henton with 13.8 ppg and a 39.2% success-rate from beyond the arc.

Other than Henton and Cotton, no Providence players have been able to consistently make their shots from deep.

Those two players may be enough, however, to make the Wildcats' defense struggle. Villanova really hasn't done a good job of guarding the perimeter for 40 minutes in any of their games this season. Certainly not in the last few.

Offensively, Villanova is still looking for a second option after Maalik Wayns. The talented guard has been the only consistent threat to score on the Villanova roster, with a number of players performing well, but none consistently. Mouphtaou Yarou recorded a double-double against Pittsburgh, but has also had games where he was a statistical non-factor. Along with Dominic Cheek, his development has been a disappointment to Jay Wright so far.

James Bell and JayVaughn Pinkston have both performed well in the last few games, with Pinkston scoring in double digits in 8 of 10 games since January 1st — including 3 double-doubles. Bell, for his part, has scored in double-digits in each of the last 5 games, starting with the Seton Hall victory. Bell also had a double-double against Louisville and leads the team with 36.7% shooting from 3-point range.

Villanova needs a more balanced attack and an answer for defense on the perimeter, and that is what the 'Cats are trying to find when they talk about "getting better," this season. Nobody will magically transform into a sharpshooter before the end of the season, nor will any player learn to take defenders off the dribble overnight. Instead, the 'Cats need to meet the more reasonable goals of playing competent defense and offense that can survive without Wayns on the court.

A win for the Wildcats would be their 14th over the Friars at the Pavilion and push them up into the group of four teams with 4-wins on the season. They wouldn't have to win out in order to finish the season at .500 in the league, but they would in order to finish above that mark. That is about what it would take for the Wildcats to climb up to the middle of the Big East pack.

The game will tip-off at 8:00 p.m. eastern from the Pavilion at Villanova and coverage will be provided by ESPN3.com and locally on WPHL-17.