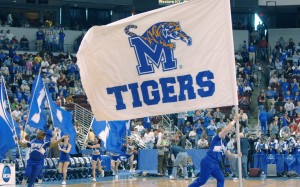 The Big East achieved something that no other conference has done, they have finally landed four schools in the same Final Four. By agreeing to terms to have the University of Memphis join the conference for the 2013-14 academic year, all four participants in the 1985 Final Four are now members of the Big East conference. Memphis has had its share of success since then, as well, and will provide a natural rival for Louisville and Cincinnati, who were previously aligned with Memphis in Conference USA.

ESPN's Stats and Research department ranked Memphis Tigers' Basketball the 14th most prestigious program in modern college basketball in 2008. They play their home games at the FedEx Forum, an NBA arena, and draw major crowds for Conference USA games. In fact, their attendance last season was bigger than every Big East school except Louisville.

Memphis has made 23 appearances in the NCAA Tournament in basketball, reaching the Final Four three times and playing in the 1973 and 2008 title games. The Tigers' football team, though it is considered among the nation's worst in recent seasons has earned bowl bids in five of the last nine years.

Memphis will now join the Big East in all sports.

They will join with Central Florida, Houston and SMU as full members, while Boise State, San Diego State and Navy (in 2015) will become football-only additions to the conference. Memphis makes up for some of the basketball star-power that will be lost when Syracuse, Pittsburgh and West Virginia leave the conference.

"Over the past decade, the University of Memphis has demonstrated an unwavering commitment of competing at the highest level in college sports," Big East commissioner John Marinatto said in a statement.

"The University has positioned itself for long-term success by upgrading facilities and investing wisely in various areas of the athletic department including coaching and administration. We are confident that the addition of this outstanding athletics program located in a top 50 media market and in the heart of the nation’s largest conference footprint will further propel the Big East and the University of Memphis to even greater levels of success in the future."

Memphis athletics director R.C. Johnson has previous experience with the Big East when he was with Temple University in the early 1990's. Johnson didn't believe that that portion of his resume had much effect on today's announcement, however.

"The Temple relationship was a long time ago," he noted. "I don't think that really had any bearing. As John just alluded to, there are a lot of changes. When I was at Temple, Tranghese was the commissioner and John [Marinatto] was not in the office at the time."

"Several years ago we asked Michael [Tranghese] to come in and look at our facilities, kind of analyze where we were with the idea that someday we might have an opportunity to become a member of a BCS conference, and he did that. We had him in a couple times, asked him to be a consultant, which he did for us. But that was about two, three years ago."

The Big East will have 17 full members, including Memphis, which means that the Big East tournament at Madison Square Garden might also be expanding. A 17-team bracket remains a possibility, though no discussions have been had about instituting basketball divisions.

"Our membership will get together and we'll analyze all of the possibilities of a 17-team postseason championship," Marinatto stated. "We'll initially present what we have to our athletic directors at an upcoming meeting and then we'll make our recommendations to our presidents."

According to a Big East release, the moves will boost the conference’s television reach to more than 31 million homes — nearly 28 percent of all U.S. television households. The conference will have thirteen members located among the top 30 television markets with 17 of them in the top 50.

The Big East's plan for expansion, of course, is based on a goal of having 12 football programs and a championship game in that sport. Memphis would help the conference reach that number, giving them 11 football teams when they come in. A few years after, in 2015, the Big East will add Navy as the 12th football member.

Memphis' athletics department has invested in their facilities and programs in hopes of finding a major conference home. Despite rumors of Big East interest since the early-2000's, however, they have been left on the sidelines.

"This is an exciting day for Tiger athletics," said Johnson. "Many years ago we set as a departmental goal the task of being the best that we could be in every athletic endeavor. With today’s invitation to join many of our friends in such a prestigious conference means we have achieved one of our top missions."

Few people are assuming that Big East expansion is over, however. While the official goal is 12 football teams, in reality, further expansion is needed to ensure a certain level of stability. Doing so without becoming an unmanageable collection of voices and mouths to feed, however, may be a challenge.

John Marinatto would not commit to any future expansion, however, and insisted that the Big East would wait until 2015 to have a conference championship game.

"Our stated goal over the past 4 or 5 months has been that we want to have a 12-team football league with two division and obviously with an annual championship game," Marinatto confirmed.

"We haven't talked about accelerating that. We knew that the Naval Academy's ramp-up period would take 3-years before we could wrap up their contracts — both scheduling and as well as the television. So we are not planning, right now, anything to accelerate the championship game. As far as it is right now, a championship game will occur when Navy joins the league in the 2015 season.

"We're obviously pleased that we fulfilled our primary objective, but we're always going to be vigilant and we're going to continue to do whatever is in the best interests of the conference. So you never say never, I guess, but we've reached our goal and we're pleased that we've done that.

"But we're always gonna, obviously, continue to evaluate opportunities as time goes on."

Marinatto declined to comment on whether any of the new Big East members would be available to join the conference in 2012, or whether that discussion had been had. Any response, he said, was too closely related to the WVU lawsuits.

Temple was not included in the current round of expansion, prompting questions from the media and others as to why that occurred.

"There were a lot of reasons that we explored Memphis, including among others central time zone," Marinatto responded to that question. "We've created, as you know, this very unique situation with regard to the West Division. We needed a school that would fit into that West Division.

"Geographically the school is located in the heart of our conference, in the heartland of America. All of those things were contributing factors in us determining ultimately that this was the best decision to make."

Temple administrators were apparently surprised by the move, and they were expecting to receive a Big East invitation over the Tennessee school. The Owls were previously Big East members in football-only in the 1990s through 2004. They are now on the radar to join either Conference USA or the merged CUSA/Mountain West conference that has been talked about after CUSA officials called them yesterday to gauge interest.

It is unknown if Temple would be interested in that move.

Asked about the potential of college football moving away from the BCS and toward a four-team playoff model for crowning its champion, commissioner Marinatto wouldn't rule anything out. The mini-playoff that has gained some steam in the media has also recently gained traction as a talking point among conference leaders.

"We've actually had the discussion of what was publicly discussed in the last couple of days," Marinatto said, referring to the proposal to institute a 'plus-one' playoff for FBS football.

Expansion hasn't allowed the Big East much time to settle on a position in that regard, but with 12 football teams lined up for the future, that discussion will be forthcoming. Any change to the way FBS football crowns its champion could have a monumental impact on college football in general.

"Our membership hasn't had a chance to sit down and talk about that with everything else going on. I think we would be open to that concept at this point.

"We haven't fleshed out the details of what that would mean, how it would be figured. It's probably very premature for us at this stage anyway before our colleagues and I get together later on in February to talk about all of the prospects.

"As we've stated in the past we're open to all of the things that are on the table and being discussed today. Once we actually sit down and talk about the details, we'll determine what our formal position is."