Share All sharing options for: FBS? FCS? What's Next? 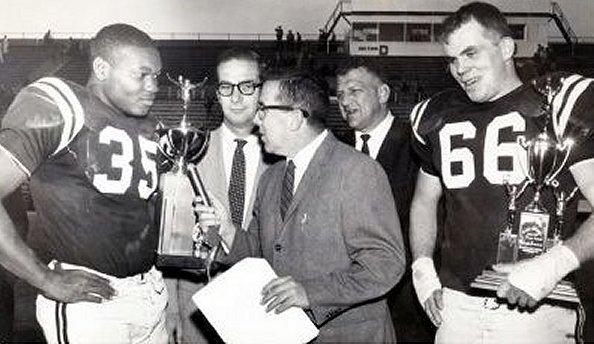 "TV is everything in sports and sports is everything in TV," MSNBC president Phil Griffin said to the large crowd assembled for the Villanova Law symposium on "Moneyball." There is no bigger television draw for college sports than football. College basketball does well, particularly in the northeast, but the best college hoops games will rarely exceed the overnight ratings of low-level Bowl Subdivision football match ups.

On February 8, Duke and UNC reached an overnight rating of 2.2 and over 3 million viewers on ESPN, prior meetings between the two teams were more often at or below a 1.5 rating. Most college basketball games do far worse with a January 28th meeting between Georgetown and Pittsburgh drawing a 0.8 rating on ESPN.

A good college football game, meanwhile, can draw more eyeballs than anything else on television. Going up against the World Series, a Saturday night college football game in October drew over 2.5 million viewers this fall. Boise State's trip to Toledo, hardly an even match-up, drew the same ratings share as Duke/UNC, one of the most anticipated basketball match-ups of the year.

That is why football seemingly has taken precedence over all else when it comes to conference realignment. Basketball has television value, perhaps more so regionally in the east, but is vastly eclipsed by the value that outlets like ESPN are willing to pay out for college football content. While professional football is America's favorite sport, the college game has now tied major league baseball for second-place in the hearts of sports fans.

That shift might not have been foreseeable when Father Dobbin oversaw a feasibility study in 1997 that ultimately declined to move football to the Big East (though, UConn clearly saw something), but it is in giant neon lights today. Villanova was ready to sign off on a move to the Big East in April 2011 and while the Big East shelved the move at that point, it remained likely to happen until Pittsburgh and Syracuse stunned the conference with the announcement that they were accepting invitations to join the ACC.

Will they or won't they?

Behind the scenes, sources confirm, Villanova is still very interested in moving football to the Bowl Subdivision. Moving to the Big East would remain the school's preference, but that conference needed to have 12 football members going into coming television negotiations and the Pittsburgh, Syracuse, TCU and West Virginia defections changed priorities as far as that was concerned.

Villanova doesn't know when the next chance to join the Big East in football will come. A source noted that while it could come next week, more likely, the school will have to wait for the Big East to figure out what its next television deal looks like and probably will also have to wait for a verdict on changes to the BCS AQ system.

If automatic qualification to the BCS (or some similar arrangement) remains in place with the next BCS contract, the Big East may be more likely to take take a chance and upgrade Villanova. The same is true if the television contract can be improved with more additions to form a 14 or 16 team conference. AQ-status might not be a necessity for Villanova football, but it would be unlikely that the Wildcats would be allowed to join the conference if the move would decrease the per-school pay-out from television partners.

Villanova isn't sitting idle, however, football is on the agenda in the athletics department. In the short-term, Nova is hoping to renovate football facilities to provide more state-of-the-art weight room and locker room facilities for the student athletes. The program will also have access to a leased indoor practice facility, located off-campus, this spring and perhaps during the season. Longer term, a football building is something that could be built — no plans for that have been finalized at this point, and plans that were in progress last spring would perhaps be altered in the future.

Renovating the weight and locker rooms in the stadium would solve two of the program's biggest problems in the short term. As a source noted, "nobody ever said that your weight room has to be inside the football building," and both renovations would be used long into the future by someone, even if a football building is constructed later.

The school will be releasing more details about their facilities plans later this spring as they expand fundraising efforts.

If the opportunity to move to FBS doesn't come, new facilities will allow the Wildcats to stay at the top-levels of FCS football. If the opportunity does come, however, the school will have a much easier move.

The waiting is the hardest part

Patience is a virtue, according to the old British proverb and for Villanova it is a necessary one.

The Big East is the best of the options that Villanova football can reasonably pursue. The administration is constrained as to what they can say or how they can act by the belief and understanding that they must act as a "good citizen" within the conference in the mean time. The Big East, after all, likes to operate behind a veil of confidentiality in these sort of matters.

Villanova was close to being voted into the Big East football league prior to the departures of Pittsburgh and Syracuse (though, how close depends greatly on who you ask), and until that door is fully slammed-shut, it remains a possibility.

John Marinatto has stated that Big East expansion is complete last week, but that may not be the case. He left the door open for further expansion by telling the media to, "never say never," on a conference call. Marinatto would like to walk into television negotiations with a conference line-up that appears to be complete — so that he has a position of strength and certainty to work from. Don't rule out a 14- or 16- team league just yet and if that happens, there could be an opening for Villanova football.

The NCAA won't allow an FCS program to move to FBS without a conference affiliation, so moving up as an independent would be impossible. Moving up with a football-only deal with a MAC or C-USA deal would be technically possible, as well, and that option hasn't escaped the athletics administrators at Villanova (though it has been kicked around, our source indicated that it was more a casual discussion than a serious inquiry). Making any move before the Big East has responded to Villanova football with some level of finality could severely upset relations with the conference — which could really defeat the purpose of moving up, which is to land in a BCS conference eventually.

It would also be financially difficult — outside of the six current BCS conferences, there isn't much in the way of television revenue available. Villanova currently sponsors 24 varsity sports and would have to cut that down to afford FBS football outside of a BCS conference, to redirect a larger share of the current athletics budget to football. An FBS football school is required to sponsor a minimum of 16 varsity sports. With a Big East invitation, however, Villanova believes that they would be able to maintain their current athletics offerings without any significant cuts — a product of having the additional TV revenues to increase the department budget and support football.

Cutting sports would be a dramatic change of direction for Villanova, one that the university would not choose lightly.

Longer term — and that could mean next week, next year or next decade — Villanova still hopes to have a seat at the BCS football table. Putting the Villanova brand in front of a much larger national audience fits well with the strategic plan of the university. The Big East remains the best fit for that move, but the school will have to wait for the conference to resolve some outstanding questions before the continued feasibility of that option can be determined.

In the short term, Villanova has plans to move forward and invest in a football program that has been successful despite its aging facilities. Until the next opportunity to upgrade comes along, Villanova will strive to make moves that will allow the program to continue to compete at the top of the Championship Subdivision. That means a plan to update and improve the training and support facilities for the program, starting with a re-do of the Powerhouse weight room and locker rooms.

The university also has plans to work on improving the football game day experience, to encourage attendance and build a football culture in the fall months. While no solutions have been settled on, a number of ideas have been discussed, including ways to expand tailgating (or moving more games to PPL Park).