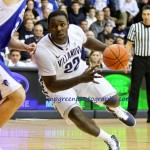 The Big East Conference named JayVaughn Pinkston its Rookie of the Week for the second time this season. Pinkston had a tremendous outing against the Providence Friars last week, leading the team with 28 points and 14 rebounds in a comeback victory. With that being Villanova's only game of the 7-day period, Pinkston's candidacy for Rookie of the Week was likely assured since Tuesday.

Pinkston was last named Rookie of the Week on January 23rd when Maalik Wayns was also honored as Player of the Week. Wayns only scored 3 points last week after suffering an injury to his MCL. This week the Big East gave its Player of the Week honors to Notre Dame's Jack Cooley who scored 21.5 ppg, and grabbed 13.0 rpg in two wins.

Pinkston will attempt to keep his hot-streak going on Wednesday night against the South Florida Bulls in Tampa.